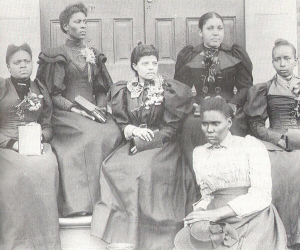 In the following article by Alton Hornsby, Jr., the Fuller E. Callaway Professor of History at Morehouse College and former editor of the Journal of Negro History, briefly describes the founding of Atlanta University, Clark College (now Clark Atlanta University), Morehouse College, Spelman College, Morris Brown College and the Gammon Theological Seminary.  This article originally appeared in the Program of the American Historical Association for its Atlanta Meeting in 2007 as “The Historically Black Colleges of Atlanta.”

Amid the major readjustments that African American freedpeople had to make after the Civil War, an immediate zeal for education arose. In most of the South, the first elementary education for freedpersons was carried on under the auspices of the American Missionary Association and the Freedmen’s Bureau. In one such school in Atlanta, John Greenleaf Whittier received the inspiration for his poem “Black Boy of Atlanta.” As he toured the facility with the head of the Freedmen’s Bureau, a young black boy, Richard R. Wright, told the white men they could carry a message back to Northerners: tell them that “we’re rising!”

The complex of historically black colleges in Atlanta today forms the largest center for the higher education of blacks in the world. For many years, these institutions, their work, and the black elite that they launched offered a stark contrast to the everyday life of many black Americans.

The oldest of the institutions, Atlanta University, was the alma mater of James Weldon Johnson, Walter White, and hundreds of the most distinguished blacks in American history. The school was chartered by the state of Georgia in 1865 and began as a grammar school, progressing eventually to university status. With the arrival of W.E.B. DuBois on the Atlanta University faculty in 1896, the school’s scholarly reputation became firmly entrenched. By 1899 Georgia Governor Allen D. Candler could say, “Atlanta University had done more to advance the Negro in Georgia than any other school.”

As one of only a handful of predominantly black graduate schools, the university prospered until recent times, when it faced declining enrollments and serious financial troubles in the wake of desegregation. A solution was reached by merging with Clark College in 1988. Thomas W. Cole, Jr., then president of Clark College, was elected president of the merged institution, which took the name Clark Atlanta University.

Two years after the Civil War ended, Morehouse College got its start. In 1866 Richard C. Coulter, an ex-slave, returned to Augusta, Georgia, from the National Theological Institute in Washington, D.C., bearing a letter authorizing him to organize a Baptist related school for blacks. Since the ex-slave was unsure of himself, he turned the letter and responsibility over to a white Augusta businessman who had befriended blacks, William Jefferson White. The college moved to Atlanta in 1879.

A new era, characterized by academic innovations and expanded physical facilities, dawned in 1906 with the appointment of John Hope as the college’s first black president. He established a sound academic tradition, which has continued to be a trademark of the institution. Morehouse’s reputation was further enhanced during the administration of Benjamin E. Mays, which began in 1940. Mays recruited an interracial and international faculty and secured an increased endowment. His successor, Hugh M. Gloster, the first alumnus to lead the school, expanded into such professional areas as business, engineering, and medicine. The Morehouse School of Medicine thus became the only predominantly black medical school to open in the 20th century. It was led in its infancy by Louis W. Sullivan, who later became U.S. Secretary of Health and Human Services.

In 1881 two Bostonians, Sophia B. Packard and Harriet E. Giles, founded Atlanta’s Spelman College, the nation’s oldest historically black college for women. They were assisted in their efforts by the Reverend Frank Quarles of the Friendship Baptist Church. (John D. Rockefeller was an early supporter of the school, and his generosity was acknowledged when the school was named for his wife, Laura Spelman.) Spelman has maintained a favorable financial situation ever since, thanks to such gifts as the one made by Bill and Camille Cosby—$20 million—during the administration of Johnnetta B. Cole, the first African American woman to lead Spelman. The school achieved a reputation as the “Radcliffe and Sarah Lawrence of the Negro race.”

In 1869 the Methodists founded Clark University. Clark experienced a rapid period of physical and academic growth under the leadership of its first black president, William Henry Crogman. One of the first graduates of Atlanta University, Crogman spent 45 years as a teacher and president of Clark. Following Crogman, Clark was led by such strong presidents as James P. Brawley, who guided the school through the turbulent civil rights era; Vivian U. Henderson, a distinguished economist; and Thomas W Cole, Jr., a prominent chemist.

The African Methodist Episcopal (AME) Church established Morris Brown College in 1881. It was named for a free South Carolina preacher who had been forced to leave Charleston following the Denmark Vesey plot to free slaves in 1822. Brown later became a bishop of the AME Church. The first two “principals” of Morris Brown were women. They were followed by men, most of them ministers, who led the institution into the 1990s. In 1942 Morris Brown affiliated with the Atlanta University Center complex of colleges. Through the years, Morris Brown has had difficulty attracting outside financial support, and it has generally enrolled more financially disadvantaged students. Several factors were responsible for its loss of accreditation in 2002.

Gammon Theological Seminary, established in 1883, was named for philanthropist Elijah H. Gammon, who made an initial donation of $20,000, and it soon became the most prestigious black seminary in the South. When John W.E. Bowen took over the Gammon presidency in 1906, he was the first and most distinguished black leader to occupy the Gammon presidency until recent times.

Gammon was the last black institution of higher learning established in Atlanta until the mid 20th century and the first to cease its existence. In 1958 Gammon affiliated with the Atlanta University Center consortium, took on several additional denominational seminaries, and became the Interdenominational Theological Center (ITC). The Reverend Harry V. Richardson, a distinguished Methodist minister and scholar, was the first leader of the center. The ITC still produces the majority of seminary-trained ministers for black communities in the United States.

Creation of the Atlanta University System

The nationwide recession of 1928-29 hit Atlanta University especially hard. After a spokesman for the General Education Board flatly declared in December 1928, “We’re tired of giving out little dots of money first to one college, then to another in Atlanta. There ought to be a way of bringing them together,” the school sought an affiliation with others in the area. Amid the formidable challenge of overcoming institutional loyalties, denominational divisions, and athletic rivalries, Morehouse’s John Hope, assisted by Atlanta University president Myron Adams and Spelman president Florence Read, forged a plan of affiliation in 1929 that resulted in the Atlanta University System, a loose consortium of the three schools. Under the terms of agreement, Atlanta University was to offer all graduate and professional work, and Morehouse and Spelman undergraduate work for men and women, respectively. Each institution was to remain autonomous, with its own finances, board of trustees, president and other administrative officers, and student body. Some buildings, including a common library, would be jointly occupied, and there would be student and faculty exchanges. The affiliation provided the foundation for the Atlanta University Center. The affiliation is older than any other college consortium, excepting the Claremont group in California.

Those who would understand the unique role of the black leadership in Atlanta can look first at the city’s black institutions of higher learning. The rise of these schools was a new and inspiring chapter in the history of black higher education and stands as a monument to the dreams, zeal, and sacrifices of black Americans and the practical and humanitarian benevolence of white American philanthropy.