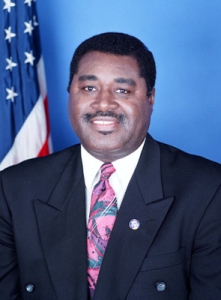 Earl Hilliard, lawyer, politician, and United States Representative from Alabama’s Seventh Congressional District (1993-2003), was born in Birmingham, Alabama to parents Iola Frazier and William Hilliard in 1942.  Growing up in a segregated neighborhood Hilliard graduated from Western-Olin High School in 1960 and then attended Morehouse College in Atlanta.  At Morehouse, he met Martin Luther King Jr., who inspired him to fight for black rights.

Hilliard received a BA in 1964, a law degree from Howard University Law School in 1967, and MBA from Atlanta University in 1970.  In 1967, he wed Mary Franklin with whom he has two children, Alesia and Earl, Jr.  While working toward his degrees he worked at Miles College in Birmingham and Alabama State University in Montgomery.   He also began a law firm in Birmingham called Hilliard, Jackson, Little & Stansel

In 1975 Hilliard began his political career when he won a seat in the Alabama state legislature representing a Birmingham district.  Elected to the state senate in 1980, Hilliard fought for legislation that would benefit the urban poor. During his time in the state senate, he became chairman of the Judiciary and Commerce, Transportation, and Utility Committees. He also joined the boards of trustees at Miles College and the Tuskegee Institute.

After Alabama redrew congressional district borders in 1992, Hilliard decided to run for a seat in the House of Representatives in a new district with a black majority.  Hilliard’s victory made him the first black congressman from Alabama since Reconstruction.  He was re-elected to his Seventh District Congressional seat four more times.  He served on the Agriculture, Small Business, and International Relations committees and as the vice chairman (1997-1999) of the Congressional Black Caucus. Hilliard was also a member of Alpha Phi Alpha Fraternity.

Throughout his ten years in Congress, Hilliard focused on economic issues, such as preventing the closure of the Tuscaloosa airport and reestablishing the Gees Bend Ferry.  He also fought for the expansion of Alabama’s military installations.  He also continued to support legislation that would help Alabama’s urban poor.  He called for a Southern Rural Development Commission, modeled after the Appalachian Regional Commission to assist economic development in rural communities in ten southern states.

In 2002 Hilliard lost his congressional seat to Artur Davis, a Harvard-trained lawyer and former assistant district attorney.  After the election he returned to his law firm and worked as well as a mortgage banker.