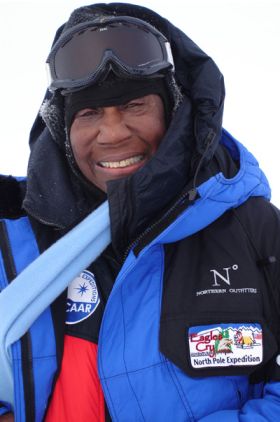 Barbara Hillary was the first African American woman on record to reach both the North and South Poles. Born in New York City, New York on June 12, 1931, to Viola Jones Hillary and raised in Harlem, Hillary attended the New School University in New York, N.Y. where she earned both her Bachelor of Arts and Master’s degrees. She used her studies in Gerontology to establish a career in nursing, focusing on staff training in the concepts of patient aging and their service delivery systems in nursing homes and similar facilities. She was also founder and Editor-in-Chief of The Peninsula Magazine, a non-profit and multi-racial magazine in Queens, New York. This magazine was the first of its kind in the region.

At age 67, Hillary survived lung cancer. As a result, she had surgery that caused her to lose 25 percent of her breathing capacity. This was her second cancer occurrence, having survived breast cancer the first time in her twenties. After her retirement from nursing, she became interested in Arctic travel.  After photographing polar bears in Manitoba, Canada, she fell in love with the beauty of the North. When she learned that no black woman had reached the North Pole, she sought to become the first one.

Hillary eventually raised over $25,000 to fund her expedition to the Arctic. On April 23, 2007, at the age of 76, Hillary became not only one of the oldest persons to set foot on the North Pole, but also the first African American woman to do so.

Five years after her history making journey to the North Pole, Hillary made her mark again by becoming the first African American woman on record to stand on the South Pole on January 6, 2011, at age 79.

Barbara Hillary dedicated her travel to the North Pole to her mother, Viola Jones Hillary, who moved from the “Low country” of Hilton Head Island, South Carolina to New York City in the 1930s to give Barbara and her sister, Dorothy Hillary Aranda, a chance for a better education.  Barbara Hillary’s father died when she was only one year old.

Hillary had a notable career in community activism.  She was the founder of the Arverne Action Association, Inc., a group dedicated to improving life in Arverne, New York and the Rockaway Peninsula Community.

After her expeditions to the North and South Poles, Hillary became an inspirational speaker.  She was the subject of profiles on NBC News and CNN.com and gave speeches to various organizations, including the National Organization for Women (NOW). In 2019, she traveled to outer Mongolia to investigate the impact of climate change.

Hillary’s health had been declining for a few months, and she passed away on November 23, 2019, at a hospital in Queens, New York. She was 88 years old.