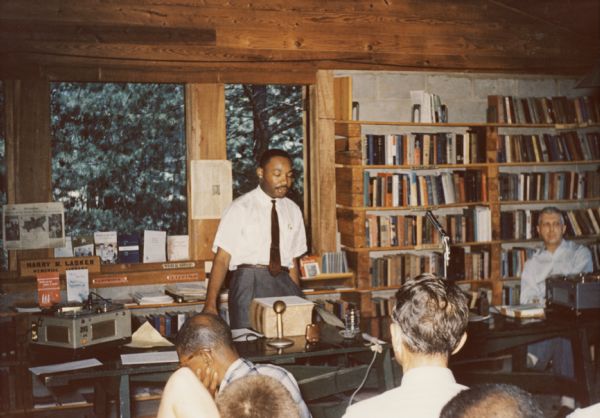 The Highlander Research and Education Center formerly known as Highlander Folk School is a leadership school and cultural training center located in New Market, Tennessee. It was primarily known as a training center for labor and civil rights activists from across the United States from the 1930s to the 1960s.  The center which, was  originally located in the town of Monteagle, Tennessee, was founded in 1932 by Miles Horton, a political activist, Don West, an educator, and James A. Dombrowski, a Methodist minister.  Its most famous students include Rosa Parks, Martin Luther King, James Bevel, Ralph Abernathy, and current Georgia Congressman John Lewis.

The residential workshops at the center’s two-hundred-acre campus provided training for generations of activists.  These workshops lasted anywhere from two days to two months and attracted up to three dozen organizational leaders from various cultural, economic, and educational backgrounds. The workshops focused on concrete, detailed issues and tactics in an effort to address specific social, racial, and economic problems that were facing various communities.

Highlander Folk School issued no grades, credits, examinations, or degrees. Rather than engaging in traditional methods of learning, faculty members often invited guest speakers who were successful activists and used documentary films, music, and dramatic presentations among other strategies to promote effective learning. Participants learned why and how to be social activists and how to employ their newfound skills and resources when they returned to their home communities.

By the 1950s, Highlander began to direct its attention to the emerging black civil rights and school desegregation campaigns in the South. During this time period John Beauchamp Thompson, a minister and educator, became actively involved with the school and was instrumental in raising money and defending the institution from its more conservative neighbors.  Under Thompson’s leadership the school developed a special literacy program for southern black students who were often prohibited from voting due to southern state literacy requirements. The school’s programs in non-violent resistance and community organizing were eventually adopted by civil rights groups such as the Southern Christian Leadership Conference (SCLC) led by Dr. Martin Luther King.  Also Zilphia Horton, wife of one of the founders and the school’s musical director, adopted as the school’s anthem an old gospel song, “We Shall Overcome” which was previously used by striking white textile workers in South Carolina.  With that adoption, the school helped popularize the tune among a new generation of activists across the nation.

Given its critical role in training activists, the school had enemies. By the latter part of the 1950s, many Southern white newspapers attacked Highlander for agitating and encouraging racial strife. Because of these charges some southern politicians called the school as a “bastion of radical communism” and demanded that local and state authorities in Tennessee close the institution.  In response to this criticism, the State of Tennessee in 1961 revoked Highlander’s charter and confiscated is property. This action led the school’s staff to reincorporate as the Highlander Research and Education center and relocate to Knoxville, Tennessee where it remained for the next decade.  Since 1971 its current home has been in New Market, Tennessee. During this period the center moved away from black civil rights issues primarily because of the success of the movement, and became increasingly involved with economic and environmental issues affecting Appalachian residents.

The Center continues to serve as a training ground for community activists.  Over the past decade it has focused primarily on increasing voter participation, immigration, youth, and the economically disenfranchised.