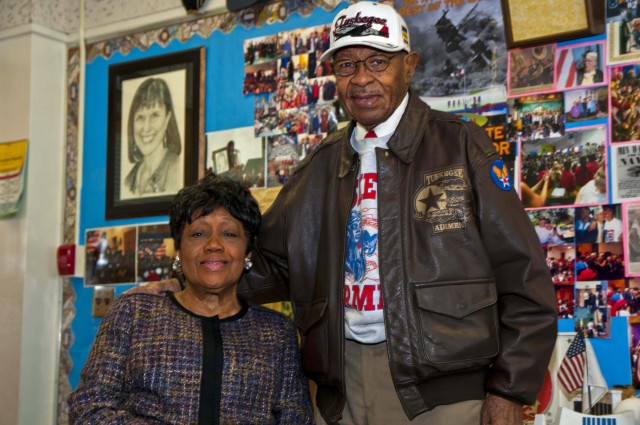 George W. Hickman Jr. was a Tuskegee airman during the World War II.  Later in his life, he was a fixture at Seattle sporting events, working as an usher at University of Washington games and Seattle Seahawks football games.

A grandson to slaves, George Hickman was born on August 6, 1925 in St. Louis, Missouri.  He developed a passion for aviation as a child while looking up at passing planes in the sky.  In 1943 during the Second World War, Hickman joined the Tuskegee pilot training program of the Army Air Corps in Alabama.   After witnessing the maltreatment of a fellow black cadet, he voiced his opposition to his white superiors.  As a result of his protest, he was barred from flying as a pilot in the Army despite being a cadet captain.  He graduated from the airman program as a crewman in 1944 and served in the European Theater as a flight mechanic for the duration of the war.  He was officially discharged in 1946.

Following the war, Hickman moved to Amarillo, Texas.  While he was volunteering for a local library that supplied multicultural books to schools, he met his wife, Doris Baptist Crawford.  They later married in 1955.  Despite being a war veteran, he constantly felt the brunt of Southern discrimination.  Amarillo whites pushed him off sidewalks and spat on him even when he wore his army uniform.

In 1955, Hickman moved to Seattle for better opportunities and worked for Boeing as a manager.  Among his duties was supervision of the accounting training equipment. He retired from Boeing in 1984.  Hickman lived in the Montlake neighborhood of Seattle and sent all four of his children to St. Joseph School in the Capitol Hill section of the city.  He eventually became the first black chair of the St. Joseph School Commission, the governing body of the institution.

Hickman, a long time avid fan of University of Washington football, purchased his first pair of season tickets to its football games in 1962.  He later worked as an usher for sports events throughout Seattle, including University of Washington basketball and football games and Seattle Seahawk football games.  He became a popular fixture among both fans and team officials, personalizing the job of usher.  UW basketball coach Lorenzo Romar often spoke of Hickman to his players as a source of inspiration.  In November 2012, he was given the honor of carrying the “12th Man” flag at a Seattle Seahawks game.

In 2007, Hickman received the Congressional Gold Medal with his fellow Tuskegee airmen.  Two years later, in January 2009, he was invited to attend President Barack Obama’s inauguration.  Although Hickman did not have enough money to make the trip to Washington, D.C., the UW Athletic Department collected donations among the athletic community which allowed him to attend the historic ceremony.

Hickman passed away in Seattle on August 20, 2012, at the age of 88.  He is survived by his wife, Doris, four children, five grandchildren, and two great-grandchildren.