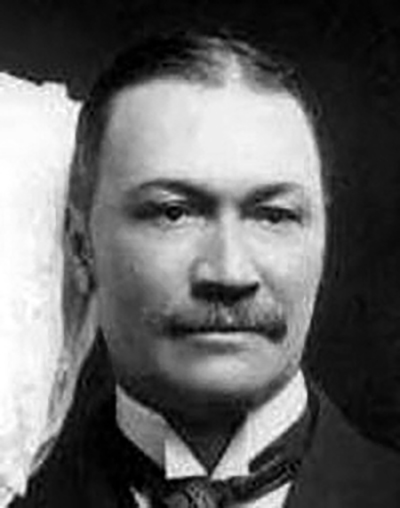 Alonzo Franklin Herndon was an African American entrepreneur who founded and was the first president of Atlanta Life Insurance Company.  Herndon was born on June 26, 1858 in Walton County, Georgia to Frank Herndon, a white farmer, and Sophenie, his slave.  By the time of his death in 1927, Herndon was Atlanta, Georgia’s wealthiest African American and one of the first black millionaires in the United States.

Herndon worked on his father’s plantation near Social Circle, Georgia.  Freed by the 13th Amendment, Herndon and his mother, younger brother, and maternal grandparents became sharecroppers.  Herndon supplemented the family income by working as day laborer and peddler of peanuts, homemade molasses, and axle grease.

In 1878, at the age of 20, Herndon left his family and moved to Jonesboro, Georgia where he opened his first barbershop.  He developed a great reputation as a barber and his business thrived.  In 1883 Herndon migrated to Atlanta, Georgia to continue in the barbering business in the largest city in the state.  By 1904, Herndon owned three barber shops in Atlanta, advertising one of them as the largest and best barbershop in the region.  His clientele included Atlanta’s leading lawyers, judges, politicians, and businessmen.  As his earnings grew, Herndon began to invest in real estate, purchasing more than 100 rental houses, commercial property along Auburn Avenue in Atlanta, and a plantation near Tavares, Florida.  At the time of his death Herndon’s real estate holdings were valued at nearly $325,000.

In 1905, Herndon purchased a failing insurance company, which he incorporated as Atlanta Mutual Insurance Association.  He took over a company which had $5,000 in assets in 1905.  By 1922 the company had more than $400,000 in assets.  That year Herndon changed the name of the company to Atlanta Life Insurance Company.  The Company rapidly expanded, establishing branches in Florida, Kansas, Kentucky, Missouri, Tennessee, and Texas.  Herndon saved other failing insurance companies by merging their company with Atlanta Life Insurance, claiming his efforts were designed to build confidence in black businesses and save jobs for African American men and women.  Regardless of the reason, his acquisition strategy made Atlanta Life one of the most successful black businesses in the nation by the 1920s.

Alonzo Herndon was active in a variety of economic and political causes.  He was a founding member of Booker T. Washington‘s National Negro Business League in 1900.  Five years later he was one of the original members of the W.E.B. DuBois-led Niagara Movement.  Herndon also used his wealth to support local institutions and causes, such as the Young Men’s Christian Association (YMCA), Atlanta University, the First Congregational Church, the Southview Cemetery, and the Atlanta State Savings Bank.

In 1893, Herndon married Adrienne Elizabeth McNeil, a professor at Atlanta University, who influenced his cultural and educational growth.  Alonzo and Adrienne had a son, Norris.  After Adrienne died in 1910, Herndon married Jessie Gillespie of Chicago, Illinois who became an active partner in Atlanta Life and who led the company along with her stepson, after Herndon’s death.

In 1910 Alonzo and Jessie Herndon built the Herndon Home which at the time was one of the largest mansions in Atlanta.  Today the home is registered as a National Historic Place.  Alonzo Herndon, a member of Alpha Phi Alpha Fraternity, died in Atlanta on July 21, 1927 at the age of 69.