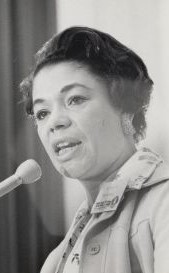 Keeping her married name, Hernandez briefly attended New York University before accepting an internship in Los Angeles, California, with the International Ladies Garment Workers Union (ILGWU). She became the education and public relations director for the Pacific Coast Region of the union. In 1961, she graduated from California State University at Los Angeles with her master’s in government. In 1960, Hernandez resigned from the ILGWU to join the re-election campaign of California’s comptroller and future United States senator, Allan Cranston. She was appointed by California Governor Pat Brown to become the assistant chief of the California Division of Fair Employment Practices. Her first objective was to enforce the state’s anti-discrimination law.

As a result of her work, in 1964 President Lyndon Johnson appointed her to work on the newly-established Equal Employment Opportunity Commission (EEOC), where she was the only woman and the second person of color. She resigned in 1966 to form an independent consulting firm, Aileen C. Hernandez & Associates, and co-found the National Organization for Women (NOW).

From 1970 to 1971, Hernandez served as the second national president for NOW while helping to found the National Women’s Political Caucus, NOW’s Minority Women’s Task Force, and Sapphire Publishing Company with nine other African American women. She simultaneously served as president of Hernandez & Associates, taught classes in government at San Francisco State University and the University of California at Berkeley, and was a Regents Scholar in Residence at the University of California at Santa Barbara. She also co-founded Black Women Organized for Action in San Francisco in 1973. She left NOW in 1979 and toured China and South Africa before releasing the book, South Africa: Time Running Out in 1981.

Hernandez worked with the California Women’s Agenda and the Black Women Stirring Waters group in the San Francisco Bay area. She was honored by numerous national organizations and nominated for a Nobel Peace Prize in 2005 for her work in social justice and civil rights. She was a 2006 honoree of the National Women’s History Project.

Hernandez died from complications of dementia on February 13, 2017. She was 90 years old.