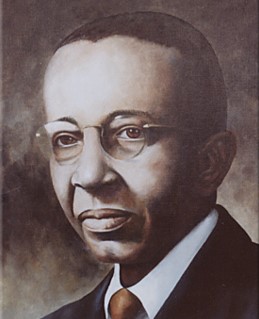 Henry Arthur Callis was one of the Seven Jewels or founders of Alpha Phi Alpha Fraternity. He was born on January 14, 1887, in Rochester, New York, to the Rev. Henry Callis and Helen Josephine (Sprague) Callis and was one of five children.

As a result of an elevator accident that killed his mother, Henry Arthur Callis, age 3, spent his formative years under the care of his maternal grandparents in Binghampton, New York. Callis graduated in 1905 from high school and left Binghampton to attend Cornell University in upstate New York, a university he first visited when he was 6. He earned a partial scholarship and worked as a tutor and waiter for white fraternity houses on campus. He was forced to drop out due to financial struggles the same year, but he did not give up; he saved his money and reentered in the fall of 1906.

During that semester, a group of African American students in a literary society, in which Callis was a member, decided to form a fraternal organization. On December 4, 1906, seven of the society members, Callis included, transitioned it into a fraternal organization named Alpha Phi Alpha. Callis was credited with the fraternity’s name and initial ritual ceremony. He is the only Jewel (founding member) of the fraternity to serve as general president (6th general president) once the organization was fully established from 1915-1916 onward.

Upon graduation from Cornell in 1909, Callis took a position at Howard High School in Wilmington, Delaware, a school founded in 1867 for the education of African Americans. There he taught history and German and met his first wife, Alice Dunbar–Nelson, a noted novelist, poet, and civil rights activist of the early 20th century. After a one-year stint at the school, he was admitted to the University of Pennsylvania Medical School, where he studied from 1910 to 1913.

In 1913, he entered the graduate science program at the University of Chicago to broaden his understanding of biological sciences. In 1914 he married commercial artist Pauline (Parker) Callis. The following year Callis graduated and gained employment as a chemist at Armour & Co. in its chemical laboratories. He stayed with Armour & Co. until 1919, when he became a bacteriologist at the Contagious Disease Hospital in Chicago and was accepted to Rush Medical College, where he graduated in 1921.

After medical school, Dr. Henry Arthur Callis served in many important positions. Two of the most notable were as pathologist and head of laboratory services at the U.S. Veterans Hospital in Tuskegee, Alabama, and associate professor of medicine and attending physician in charge of medical services at Freedmen’s Hospital, Howard University. He continued to serve his community and fraternity until he died on November 12, 1974, at the age of 87.