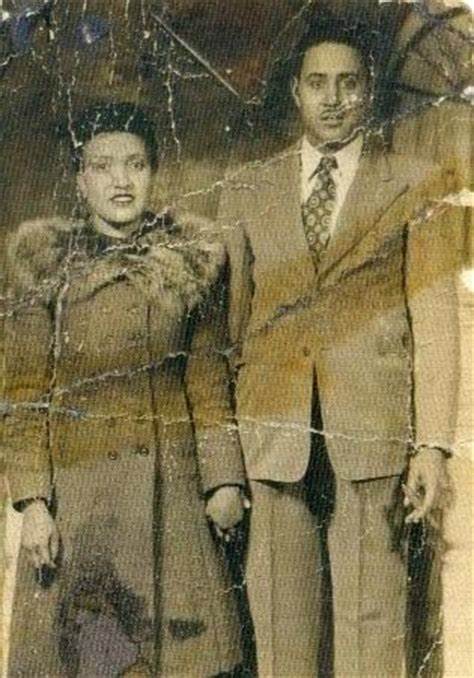 Henrietta Lacks and Her Husband, David, ca. 1945
Fair use image

In the article below Clarence Spigner, DrPH., Professor of Health Services in the School of Public Health, University of Washington, Seattle, briefly describes the saga of Henrietta Lacks whose cells have been used without her family’s permission for over sixty years of bio-medical research.  Dr. Spigner teaches a course in the University of Washington’s Honors’ College based on the book, The Immortal Life of Henrietta Lacks.

Henrietta Lacks was born August 1, 1920, into a family of impoverished tobacco farmers in Roanoke, Virginia. She died at the age of 31 from the effects of cervical cancer on October 4, 1951, after treatment in Johns Hopkins Hospital in Baltimore, Maryland. But Henrietta Lacks’s cells did not die. A sample taken from her without permission became the immortal He-La cell line used for extensive bio-medical research and then commodified in a multi-million dollar industry. Henrietta Lacks’s story was resurrected in magnificent detail in The Immortal Life of Henrietta Lacks, the 2010 best seller by freelance science author Rebecca Skloot.

Born Loretta Pleasant (it is not clear how Henrietta became her first name), Henrietta’s mother, Eliza, born in 1886, died in childbirth in 1924. Henrietta’s father, John Pleasant (1881-1969), took the children to Clover, Virginia to be raised among relatives. Henrietta married her first cousin, David “Day” Lacks (1915-2002) in 1941 when she already had two children, Lawrence and Elsie. Henrietta had her first child at age 14. Following the Depression and between the two World Wars, opportunities for African Americans opened in the steel mills in Bethlehem, Maryland, near Baltimore, and in 1941, Henrietta and David left tobacco farming with the two children and joined the Great Migration. They bought a home in Turner Station, which is now Dundalk, Maryland.

Henrietta and David had five children, Lawrence (1935-   ), Elsie (1939-1955), David aka Sonny (1947-   ), Deborah (1949-2009), and Joseph aka Zakariyyan Bari Abdul Rahman (1950-   ). Oldest daughter Elsie was mentally disabled. When around eleven years old, Elsie was committed to what was then called the Hospital for the Negro Insane, now Crownsville State Hospital. Receiving horribly inadequate and outdated treatment for mental illness at this hospital, Elsie lasted five horrendous years before dying. Deborah, Henrietta’s youngest daughter, searched for her older sister while relentlessly seeking understanding and justice about her mother’s “immortal cells.” These elements formed the core themes of Skloot’s exceptional book.

In 1951, Henrietta Lacks was diagnosed with cervical cancer and was treated at the segregated Johns Hopkins Hospital with radium tube inserts, a standard treatment at the time. As a matter of routine, samples of her cervix were removed without permission. George Otto Gey (1899-1970), a cancer researcher at Hopkins had been trying for years to study cancer cells, but his task proved difficult because cells died in vitro (outside the body).  The sample of cells Henrietta Lacks’s doctor made available to Gey, however, did not die. Instead they continued to divide and multiply. The He-La cell line was born.  He-La was a conflagration of Henrietta Lacks.

Permission for doctors to use anyone’s cells or body tissue at that time was traditionally not obtained, especially from patients seeking care in public hospitals. The irony was that Johns Hopkins (1795-1873), an abolitionist and philanthropist, founded the hospital in 1889 to make medical care available to the poor.  Informed Consent as a doctrine came into practice in the late 1970s, nearly three decades after Henrietta Lack’s death.  The new practice grew out of the embarrassment over World War II Nazi medical experiments and the infamous Tuskegee Syphilis Experiment of 1932-1972.

George Gey attempted to protect the privacy of the deceased Henrietta Lacks. Thus the origin of the cells was alleged to have come from Helen Lane or Helen Larson, or even from Austrian-born American actress, Hedy Lamarr (1913-2000). Gey was the consummate professional biologist and used Henrietta Lacks’s cells in the sole interests of finding a cure for cancer. With no desire for profit, he made the He-La cells available to all interested in biological research, including virologist Jonas Salk (1914-1995). The He-La cell line in turn allowed the discovery of the Salk vaccine which led to the near world-wide eradication of polio.

Why didn’t Henrietta Lacks’ cells die in-vitro (outside her body)? Biologists have their own answers about smallest living unit, but the immortality of Henrietta Lacks’s cells probably had to do with telomerase which protected the cell chromosome from deterioration. Telomerase blocked cell division in the body, which is a good thing, in that when cancerous cells divide, they push out the good cells and produce tumours. Henrietta Lacks had cervical cancer and those cells ultimately killed her. Yet, those same cancer cells continued to divide outside of her body, allowing them to be studied for medical advancement.  Skloot pointed out that more than 60,000 studies were published by researchers who used the He-La cells, thus advancing their careers and professional prestige of the institutions which employed them.  He-La cells were shot into space to test the effects of gravity on the human cell. Research on Human Papillomavirus (HPV) and on apopotsis or programmed cell death (PCD) was also advanced because of Lack’s still living cells.

The genetic revolution exploded almost immediately following her death.  Molecular biologist James B. Watson (1928-   ) and geneticist Francis Crick (1916-2004) created the double-helix model in the discovery of Deoxyribonucleic acid (DNA) in 1953, a year before the U.S. Supreme Court’s Brown v. Board of Education which is generally credited with launching the black-led Civil Rights Movement. The eventual commodification of the He-La cells was never George Gey’s intent.  While he may not have been interested in money, researchers survive in educational institutions and research laboratories by advancing knowledge, and access to the He-La facilitated public and private grant-funding for these researchers. Medical doctors are bound by the Hippocratic Oath which requires its takers to practice medicine ethically and honestly.  No such oath is required of medical researchers whom the public often confuse with physicians.  Successful research brought recognition from colleagues, the institutions, the medical industry, and the general society. Ironically the cancer cells cut from the cervix of an impoverished 20th century African American woman generated far greater financial rewards than the effort of Lack’s enslaved ancestors to produce a child in antebellum Virginia to enrich the family’s slave owner.

The triumph of 21st century free market biotechnology, the medical-industrial complex, and continuing health inequalities by race were all epitomized by the ongoing exploitation of Henrietta Lacks’s cells.  By 1993, her only surviving daughter, Deborah Lacks-Pullum, was fighting to understand the continuing existence of her mother as the smallest unit of life. She had to confront the mind-bending cultural incompetency and insensitivity of the bio-medical profession.  Researchers “communicated” with Lacks family members in what can only be described as academic gibberish. She wrestled with inadequate and misleading information, such as statement that what was the very essence of her mother, through cell-fusion, could now be combined with plants and animals.

Evolutionary biologist Leigh Van Valen (1935-2010) reported the He-La cells had developed into a new species and was no longer human. To Deborah, such crude unqualified information meant her mother was somewhere in a man-made hell.  The stress such comments generated drove Deborah to suffer at least two strokes.  Rebecca Skloot, a freelance science writer finally broke though the understandable mistrust of Deborah and the rest of the Lacks family, setting a course towards determining the truth about her mother’s cells.

Meanwhile, bio-technology laboratories and academic research institutions grew rich from the continually dividing He-La cells while the Lacks family endured continuing poverty and deprivation. The ethical contradictions of their mother’s cells having been taken, studied, sold, and resold in the free-market was tested in the U.S. Supreme Court case of Moore v. Regents of California (1990).  John Moore had visited the University of California Medical Center in 1976 seeking treatment for hairy cell leukemia from Dr. David W. Golde, who took cell samples.  By 1983, Golde had created a cell-line from Moore’s T-lymphocytes without Moore’s knowledge.  Dr. Golde named himself and colleague Shirley G. Quan as the inventors of the new cell-line and entered into agreements with Genetics Institute, a bio-tech corporation engaged in the development of commercial applications for its research.  As part of the agreement Golde was named a paid consultant and quickly grew wealthy from stock options in the bio-tech company. Upon discovering Golde’s deception, Moore, a well-educated, middle class white man, hired an attorney and sued for a share of the profits gained from his own bodily tissue.  The California Supreme Court, however, reasoned that Moore had no right to any of the profits, even if derived from his own “discarded” body-parts.  The Court concluded that bio-medical research would be undermined if individual patients (or research subjects) had the power of profit from medical advancement as a result of research done from their own body parts. It said nothing about the ability of researchers to profit from those same parts. The Moore decision gave medical researchers and institutions the unlimited right to manipulate body tissue of unsuspecting patients for private gain.

The life and death of Henrietta Lacks is a cautionary tale that reflects the inherent contradiction between the stated purpose of medical research to provide benefit to human kind and the reality of blatant profiteering in the name of the advancement of science.  Rebecca Skloot was not the first writer to investigate institutional racism in medicine and this treatise should not be taken as a thorough review of her impressive research for The Immortal Life of Henrietta Lacks. Yet since the book’s publication in 2010, bio-medical institutions have successfully adopted the tactics of politicians and movie stars when caught engaging in bad behavior. Slick websites under bio-medical sponsorship which pay homage to Henrietta Lacks, have sprung up like weeds in a garden.  Self-invited speakers come forth admitting institutional shortcomings but never institutional guilt. Carefully worded statements crafted by well-paid attorneys declare that the academic research institutions they represent made no money from the Lacks cells. They fail to mention the incredible amount of prestige and grant-funding the He-La line brought and continues to bring those institutions.  The tragedy of the Henrietta Lacks saga should remind all of us, and especially those of us in the medical profession, that we have a responsibility to protect, not profit from, the bodies of those we serve including the smallest piece of those bodies, the human cell.

Spigner, C. (2012, November 19). Henrietta Lacks and the Debate Over the Ethics of Bio-Medical Research. BlackPast.org. https://www.blackpast.org/african-american-history/henrietta-lacks-and-debate-over-ethics-bio-medical-research/