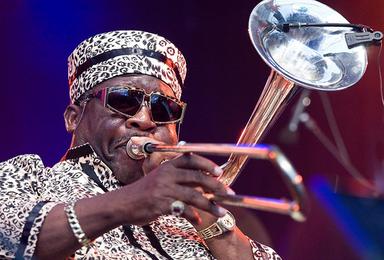 Wayne Henderson, trombonist, composer, musical innovator, promoter, became a dynamic force in popularizing a combination of jazz, funk, and fusion through over 50 active years in the music world.

Henderson was born in the Fifth Ward of Houston, Texas on September 24, 1939. With his childhood buddies, Joe Sample (keyboards), Wilton Felder (tenor sax), and Nesbert “Stix” Hooper (drums), he started playing in Wheatley Junior High School. They traveled across Texas and Louisiana with pick-up bands, and at 19, he moved with them to Los Angeles (1958) to play hard bop.  Over the next three years they performed under various names.

In 1961 Henderson decided to call the group the Jazz Crusaders, the name they would use for the rest of their career. The group fronted no leader, but they toured cities showcasing a new driving bebop sound: trombone/tenor sax leads with keyboards and drums. The group developed over the next ten years, gradually incorporating elements of funk, with melody first, and then danceable rhythm next, and intricate harmony.  The group found that combination exceedingly popular for audiences from the 1960s through the mid-1970s. The group developed Henderson’s original songs and adapted popular tunes to their repertoire.

In 1971 Henderson convinced the group to shorten its name to the Crusaders which he believed reflected their increasing shift to popular music styles and instruments. Their own growing popularity led to the Crusaders becoming the opening act for a tour of the Rolling Stones. Eight of their albums placed in the Billboard Top 50. Their interpretations of songs by the Beatles, Carole King, and others allowed them to reach far beyond their original audience of jazz fans.

Henderson left the group in 1975 and gradually branched into solo playing as well as devoting time to producing and recording with many high-profile vocalists and musicians. Working behind the scenes as a producer and arranger, he now helped the careers of many name acts including Ronnie Laws, Ramsey Lewis, Patti Austin, and Marvin Gaye among others. Rebbie Jackson’s Centipede project, which Henderson co-produced with Michael Jackson, went platinum on the record charts. Henderson also spent a considerable amount of time mentoring young, unknown musicians and encouraging their development.

In the mid-1990s Henderson reunited his original Crusaders/Jazz Crusaders on records and stage performances.  They revisited some of their original jazz concepts from the 1960s and continued to experiment with new styles and sounds. Henderson planned to start a new group, the Super Blues Crusade, at the time of his death.

Wayne Henderson, loved, respected innovator, trombonist, trend setting writer and producer, died April 5, 2014, in Culver City, California, at the age of 74. He is survived by his wife Cathy, sons Wayne Jr. and Randy, and two grandsons.