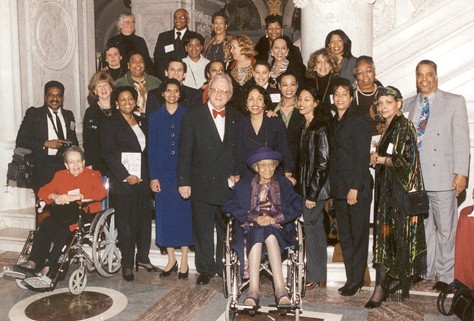 Sally Hemings was born into slavery in Virginia, probably at Guinea Plantation in Cumberland County, the youngest of six children of Elizabeth Hemings allegedly fathered by her white master John Wayles. Her mother was herself the child of an enslaved African woman and an English sea-captain, making Sally three-fourths white in ancestry.

On Wayles’ death in 1773, the Hemings family was inherited by Martha, his eldest legitimate child, and brought to the Monticello plantation of Thomas Jefferson whom Martha had married the previous year.  There the children grew up as house slaves staffing Monticello during the years that encompassed Martha Jefferson’s death in September 1782 and Jefferson’s departure to Paris, France on diplomatic service in 1784.  Three years later, Sally Hemings traveled to France as companion and maid to Jefferson’s eight-year-old daughter Maria, staying until 1789.

As France was overtaken by revolution and the status of slavery abolished, Sally and her older brother James, in Paris as Jefferson’s personal servant, were paid a monthly wage.  There too, Sally’s son Madison later recalled, his mother began a relationship with Jefferson that would produce six children between 1795 and 1808, including three while Jefferson was president.  This relationship, a political scandal at the time but one long denied by Jefferson’s admirers, now seems not only circumstantially possible in terms of Jefferson’s recorded stays at Monticello but highly probable, and with recent DNA evidence showing that Eston, the youngest of Sally’s children, was fathered by a Jefferson, most likely Thomas.

After returning from France, Sally Hemings lived on at Monticello with her family, in the slave quarters and then in one of the “servant’s rooms” under Monticello’s south terrace.  Her fellow slave Isaac Jefferson remembered her as “mighty near white…very handsome, long straight hair down her back,” while Thomas Jefferson’s grandson recalled her as “light colored and decidedly good looking.”  In the 1820s, two of her children were allowed to leave Monticello for freedom elsewhere and two more were freed by the terms of Jefferson’s will, two of only five slaves he ever formally emancipated and a further indication of his special regard for the Hemings family.

After Jefferson’s death in 1825, his daughter Martha gave Sally Hemings her “time” (she was listed as “free” in 1826) and she moved with sons Eston and Madison to a house in Charlottesville where she died in 1835. Of her surviving children, all of whom moved north out of Virginia, two would pass for “white” and two for “black,” indicative of the complex life strategies imposed by a world of racial groupings at once legally segregated yet socially and emotionally intermingled.  Sally Hemings’ own life embodies both the narrow options and hard choices open to a woman defined as born black and enslaved in early America.