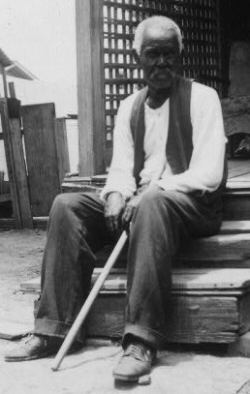 Felix Haywood was the son of slave parents bought in Mississippi and brought to San Antonio, Texas by Felix’ future master William Gudlow. Felix and his five brothers and sisters were all born and raised in slavery in San Antonio. He worked as a sheepherder and cowboy before his emancipation from slavery in the summer of 1865. After this life-changing event, Felix and his father continued to herd cattle for Mr. Gudlow, and after some time doing this they secured a small herd of 70 cattle and began their own operation. In 1886 Felix married a woman named Martha. The couple had five children, Thomas, Howard, Mamie, Felice, and Felix Jr. Haywood remained in San Antonio, Texas, until the end of his life.

Felix Haywood is best known today by a 1937 interview he gave at the age of 92 to a federal employee as part of a New Deal public works project. In it, he describes his memories of life as a Texas slave and the celebration and changes that came when the slaves were emancipated by the union army.

“Solders, all of a sudden, was everywhere – comin’ in bunches, crossin’ and walkin’ and ridin’. Everyone was a-singin’. We was all walkin’ on golden clouds. Hallelujah!

‘Union forever
Hurrah, boys, hurrah!
Although I may be poor,
I’ll never be a slave—
Shoutin’ the battle cry of freedom.’

“Everybody went wild. We all felt like heroes and nobody had made us that way but ourselves. We was free. Just like that, we was free.”