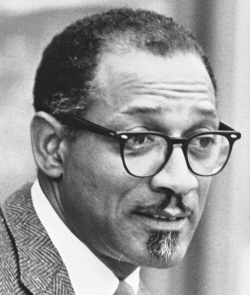 Ralph Hayes grew up poor in rural, segregated Cairo, Illinois, the fourth of twelve children. He studied journalism at Northwestern University and then transferred to the University of Washington, where he earned his B.A. and M.A. degrees in political science. In 1950 he married Elaine Ishikawa, who was his wife for 49 years. As a couple they embraced local activism and joined the Christian Friends for Racial Equality where, as Editor-in-Chief of the newsletter, Ralph wrote about national civil rights news and Japanese American issues stemming from WWII.

In 1956 Hayes became the second African American academic teacher hired by Seattle School District. He taught history and government classes in public high schools for thirty years at West Seattle, Garfield and Franklin (in Seattle) and Newport (in Bellevue).  He also taught evenings at Edison Technical College and Bellevue Community College.  For eight summers beginning in 1966, Hayes was a teacher and later director of the Upward Bound program at the University of Washington.

Hayes’s interest in local African American history, first reflected in some of the Upward Bound offerings, led to extensive research in the subject.  By the 1980s he was actively involved in the promotion of black history in the state through traveling exhibits sponsored by the Northwest Black Pioneers Association, and during the period gave over one hundred lectures on the subject in conjunction with the Northwest Black Pioneers Exhibit.  In 1990 his book, Northwest Black Pioneers: a Centennial Tribute won a Washington Governor’s Heritage Award.  Hayes was a board member for the Ethnic Heritage Council and the treasurer of the Black Heritage Society.