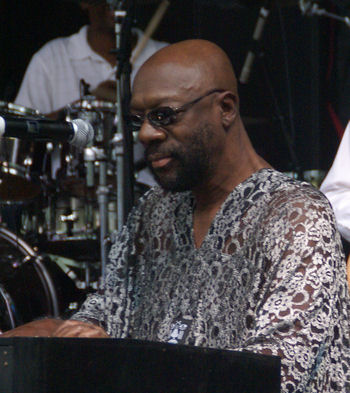 Academy Award-winning composer and musician Isaac Hayes, Jr. was born to Isaac Sr. and Eula Hayes on August 20, 1942 in Covington, Tennessee. Hayes began his career at the age of 20 when he joined Stax Records as a studio musician. By the late 1960s he was a songwriter/producer, crafting hit singles for Sam and Dave and other Stax acts.

Although his success in the music industry continued with his follow up album Black Moses, Hayes simultaneously pursued a film and television career. In 1971, Hayes created the score for the film Shaft. Recording the sound track in just four days, Shaft rose to No. 1 on the Billboard Pop Chart and garnered a Grammy and an Academy Award for Best Song and Best Score in 1972, making Hayes the first African American composer to win an Oscar. He also appeared in films such as Shaft (1971); Truck Turner (1974), his only starring role.

By the mid-1970s both Hayes and Stax Records declared bankruptcy. Though Hayes attempted to revive his career by producing modest hits during the disco era and other artists, such as Millie Jackson, he never duplicated his musical success from the early 1970s. He did, however, maintain an enduring career on screen, appearing in a total of 17 films and several TV series. His film credits include I’m Gonna Get You Sucka (1988), and Hustle & Flow (2005). His television appearances include such popular series as The Rockford Files, The A-Team and Miami Vice.

In addition to establishing himself as a multifaceted musician, Hayes was also an activist. In 1992 Hayes became honorary king of Ghana’s Ada District. As part of his humanitarian contribution to Ghana, Hayes built an 8,000 square foot educational facility to promote literacy and education in that West African nation. In 1999 Hayes founded the Isaac Hayes Foundation (IHF) on New York City’s Wall Street. The IHF is dedicated to promoting worldwide literacy, music education, and nutritional education.

In January 2006, Hayes suffered a stroke. Despite his deteriorating health, Hayes continued to work on television and film projects. In 2007 he participated in the 50th Anniversary commemoration of the founding of Stax Records as well as efforts to revive the Stax label.

Hayes died on August 10, 2008, at his home in Memphis, Tennessee. At the time of his death, Hayes and comedian Bernie Mac, who coincidentally died a day before Hayes, were shooting the film Soul Men. The film was scheduled for release in late 2008. Hayes is survived by his wife Adjowa Hayes, their son, Kwadjo, and ten children from two previous marriages.