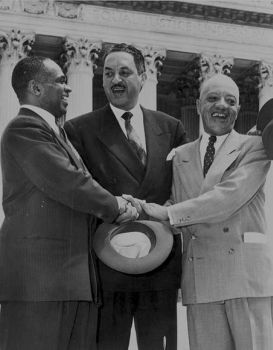 George Edward Chalmer Hayes, one of the 1954 Brown Decision attorneys, was born on July 1, 1894, in Richmond, Virginia. His father, attorney James H. Hayes, encouraged George to pursue both law and Republican politics.  He earned his undergraduate degree at Brown University in 1915 and his law degree at Howard University School of Law in 1918. After working in private practice, Hayes became a professor at the Howard Law School in 1924. Thirteen years later, he was chosen as the university’s first legal advisor.

While at Howard, Hayes worked with Charles Hamilton Houston, who was vice-dean of the Howard Law School from 1929 to 1935. Hamilton attracted a group of civil rights attorneys to the faculty, including Thurgood Marshall, James Nabrit Jr., William Hastie, Spottswood Robinson, Robert Carter, and A. Leon Higginbotham Jr.

Hayes and Nabrit initially worked together as attorneys for the Consolidated Parents Group.  Gardner Bishop founded the group in 1948 after he and other parents became concerned about serious overcrowding at Browne Junior High, an African American school in the District. Nabrit and Hayes convinced Bishop that greater pressure should be put on integrating schools. Out of that effort came Bolling v. Sharpe, one of the four companion cases to Brown v. Board of Education, with Hayes as the lead counsel.

As a member of the District of Columbia Board of Education from 1945 to 1949, Hayes campaigned tirelessly to desegregate the city’s schools and collaborated with NAACP lawyers who were mounting desegregation battles in other states. These efforts, along with the Brown case in 1954, convinced the U.S. Supreme Court that segregation in public schools was unconstitutional.

In 1954, Hayes led a successful defense of Annie Moss, a civilian employee of the Army Signal Corps, whom Wisconsin Senator Joseph R. McCarthy accused of being a communist.  Hayes criticized the senator’s investigative methods and the presumption of Moss’s guilt. Moss was eventually cleared of the charges, and the secretary of defense restored her position.

Hayes, a life-long Republican, was appointed by President Dwight D. Eisenhower as the first black member of the District of Columbia Public Utilities Commission in February 1955. The appointment made Hayes the highest-ranking African American in D.C. government and the first black person in nearly one hundred years to serve in a municipal agency in the district.

In 1962, Hayes became the first black member of the board of directors of the District of Columbia Bar Association, and four years later, he became the first black director of the Metropolitan Washington Board of Trade. He was also a member of Kappa Alpha Psi Fraternity. Hayes continued to be Howard University’s legal advisor and assisted Nabrit, who by then had become president of Howard, in his handling of the black power student uprising on campus in 1967. George E. C. Hayes died of pneumonia in Washington, D.C. on December 20, 1968.  He was 74.