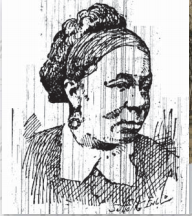 Harriet Bell Hayden and her husband Lewis Hayden (c.1811-1889) escaped slavery in Kentucky in 1844, traveling first to Ohio, then Michigan and finally settling in Massachusetts, where they became active abolitionists in Boston.  In addition to caring for their two children, Joseph and Elizabeth, Harriet ran a boarding house out of their home at 66 Phillips Street, while Lewis ran a successful clothing store.

The Hayden home also served as a stop on the Underground Railroad and is now listed as a national historic site. In 1850, they assisted a fugitive slave couple, William and Ellen Craft, who had escaped from Georgia, protecting them from slave catchers on the prowl in Boston as a result of the Fugitive Slave Act of 1850.  Lewis also led in the well-publicized rescue of Shadrach Minkins in 1851 from a Boston courthouse.  After Harriet died, part of the Hayden estate was donated to Harvard University to start a scholarship fund for African American students.