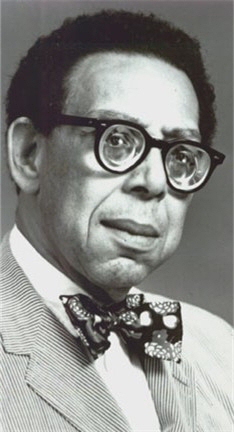 The son of Asa and Ruth Sheffey who named him Asa Bundy at birth, poet Robert Hayden was born in Detroit, Michigan and reared in “Paradise Valley,” an inner city ghetto.  Adoptive parents, William and Sue Ellen Westerfield Hayden, gave him the name by which he is known.  A graduate of Detroit City College (now Wayne State University), Hayden earned a M.A. degree in English from the University of Michigan, where on two occasions (1938 and 1942), he received the Avery Hopkins awards for poetry

During the Great Depression Hayden worked as a researcher for the Federal Writers’ Project, an experience that exposed him to writers such as Ralph Ellison, Richard Wright, and Margaret Walker, and gave him a great appreciation for African history and folk culture.  In 1940 Hayden married Erma Inez Morris and converted to the Baha’i faith. After teaching at Fisk University for twenty-three years, Hayden returned to the University of Michigan, to end his teaching career where he began it.

Hayden published ten volumes of poetry: Heart Shape in the Dust (1940), The Lion and the Archer (with Myron O’Higgins, 1948), Figure of Time (1955), A Ballad of Remembrance (1962), Selected Poems (1966), Words in the Mourning Time (1970), Night-Blooming Cereus (1972), Angle of Ascent (1975), American Journal (1978 and 1982), and Collected Poems (1985) He also edited Kaleidoscope: Poems by American Negro Poets (1967), and wrote drama. Despite the clear impact of Harlem Renaissance writers Countee Cullen and Langston Hughes on his early works, Hayden’s collective poetry reveals his deft training in Western aesthetics by his teacher and mentor, W. H. Auden, and influence of mainstream poets Hart Crane, Carl Sandburg, and Edna Saint Vincent Millay.

Hayden’s work reveals his preoccupation with, as critic Mark A. Sanders wrote, “poetic form, technique, and artistic discipline.”  This emphasis on form (art for art’s sake) brought him into direct conflict with writers of the Black Arts Movement of the 1960s who were, for the most part, interested in the functionality of art as it related to “the liberation of black people,” rather than in aesthetics.  Despite this, however, Hayden was sensitively aware of his heritage and used his poetry to pay eloquent tribute to such historical giants as Frederick Douglass, Nat Turner, Harriet Tubman, and Malcolm X. For example, Hayden’s signature poem, “Runagate, Runagate” dramatically memorializes and celebrates, through a medley of voices, the perilous quest of slaves who followed the North Star and Harriet Tubman determined to be free.

In 1966, Hayden was awarded the grand prize for poetry at the First World Festival of Negro Arts in Dakar, Senegal; in 1976 he became the first African American to be appointed Consultant in Poetry to the Library of Congress (Poet Laureate).