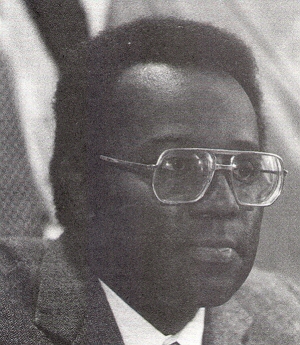 Richard Gordon Hatcher, the first African American mayor of Gary, Indiana and one of the first African Americans to serve as mayor of a major city, was born on July 10, 1933, in Michigan City, Indiana. Hatcher was elected mayor of Gary, Indiana in 1967 and served in that capacity for the next 20 years. In the late 1970s, he also became the executive director of the National Association for the Advancement of Colored People (NAACP). In 1984, Hatcher was campaign chairman for Rev. Jesse Jackson‘s bid for president and he served as an advisor in Jackson’s 1988 campaign.

Hatcher’s administration in Gary was known for developing innovative approaches to urban issues and for promoting the civil rights of blacks and other people of color in one of the first predominantly black cities in the North.  His term began during the period when “black power” was increasingly the rallying cry of African American political activists across the nation.  Hatcher clearly identified with this new movement.

As a “first generation” black mayor identified with black power, Hatcher’s agenda was considered biased against non-blacks.  He was believed by his critics to be racially divisive and unqualified.  Hatcher often fought against the local Democratic political machine which supported his white Republican opponent over him in the 1967 election and encouraged “secession” movements by some predominantly white Gary neighborhoods.

Hatcher encouraged African American entrepreneurship by awarding the majority of contracts to black business owners, he attracted outside government and private capital to support Gary’s economic development and growth, and he promoted activities designed to instill pride in the city’s African American residents and to discourage middle-class blacks from fleeing the city.  This approach became known as “Gary-Genesis.”

Under Hatcher’s administration Gary avoided the race riots common in the late 1960s.  However, racial tension did not ease and Gary continued to lose white residents.  Moreover, Gary’s economic fortunes were compromised by the rapid decline in the steel industry which cost the city jobs and the city administration vital tax revenue.  Although Hatcher liked to boast that his city had under his administration one of the highest rates of home ownership in the nation, Gary became increasingly poor in the 1970s and 1980s.

Richard Hatcher stepped down as mayor in 1987.  A year later he started his own consulting firm, R. Gordon Hatcher and Associates. Hatcher also began teaching law at his alma mater, Valparaiso University in Valparaiso, Indiana in 1989.

Hatcher served as campaign chair when Rev. Jesse Jackson ran for president in 1984; he was also an an advisor on Jackson’s 1988 campaign. In October 2019, the city of Gary unveiled a bronze statue of Hatcher in front of city hall.

Richard Hatcher died on January 13, 2019, at Mercy Hospital in Chicago. He is survived by his wife Ruthellyn and their three daughters, Ragen, Rachelle, and Renee. He was eighty-six years old.