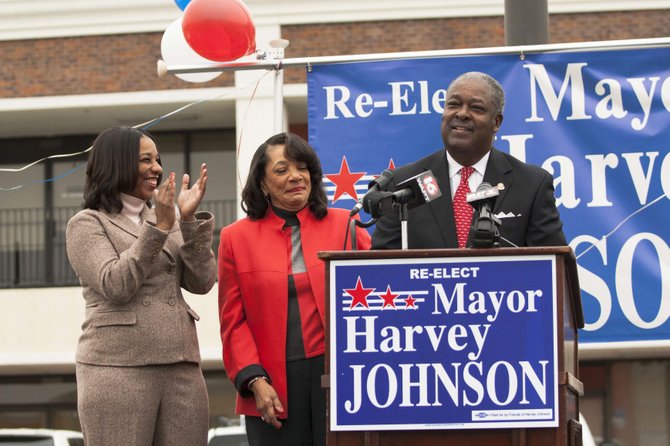 Harvey Johnson Jr. is an American politician from Mississippi. He graduated from Rosa A. Temple High School in Vicksburg, Mississippi and earned a bachelor’s degree in political science from Tennessee State University in 1968. He earned his master’s degree in political science from the University of Cincinnati in 1972. Johnson is the first African American mayor of Jackson, Mississippi. He was first elected in 1997 and served two terms until 2005. He ran again in 2009 and was elected for a third time, serving until 2013.

Johnson is best known for transforming the city of Jackson through downtown reinvestment and revitalization. When he was first elected in 1997, his administration moved to create a strong business class particularly among African Americans who were the majority of the city’s residents, create quality jobs, increase the tax base, and improve city services. More specifically, through his “Building the best of the New South” project he specifically targeted improving basic city services such as trash collection, street maintenance, repairing crumbling infrastructure, improving efficiency and customer service in city agencies, establishing programs for youth, and anti-crime initiatives. He also helped revitalize the Farish Street Neighborhood Historic District, where he built a convention center.  He was the major promoter of the Civil Rights Driving Tour of Jackson, designed to commemorate important civil rights events in the city’s history.

Despite these initiatives there were many critics during his tenure as mayor of Jackson, Mississippi. His political opponents accused him of failing to solve the crime problem, neglecting street maintenance, and doing little to address the exodus of Jackson’s middle and upper-class citizens from the city. His administration was also charged with not cooperating with the surrounding Hinds County government and he was also attacked for welcoming controversial Nation of Islam leader Louis Farrakhan to speak in the city.

Harvey Johnson Jr. is the founder of the Mississippi Institute of Small Towns. He is also a member of Alpha Phi Alpha Fraternity and an alumnus of the National Urban Fellows class of 1976. In July 2013, he was defeated by Chokwe Lumumba in his contest for a fourth term as mayor of Jackson, Mississippi.