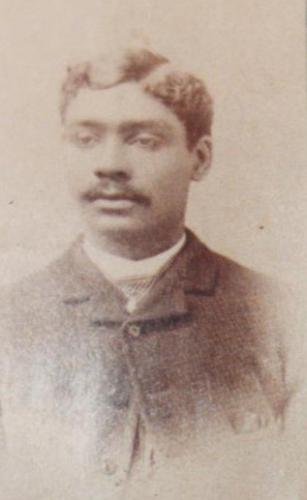 Born in Indianapolis, Indiana, in March 1860, Charles Henry Harvey was the youngest of nineteen children of Albert and Elsy (Brewer) Harvey.  Albert and Elsy were married on Valentine’s Day in 1839 in Halifax County, North Carolina, where their first child, Jesse, was born a few months later.  Almost immediately after Jesse’s birth, the Harveys escaped slavery by migrating on the Underground Railroad, to Indiana where their other children were born.

By the late 1870s, Charles was working in Indianapolis as a railroad car painter.  Eventually he was employed in some capacity on railway lines that carried him from Indianapolis to Chicago, Minneapolis and Denver.  In Minneapolis, while employed as a coachman, he boarded at the same rooming house where his future wife, Eva Ellis, worked as a domestic.  According to their children, Charles and Eva were married in Minneapolis in April 1887.

Harvey eventually transferred to the Northern Pacific (NP) Railroad which had reached Tacoma by 1886.  Charles and Eva Harvey moved north to Seattle but he continued to work as a Pullman porter for the NP briefly, commuting by stage from Seattle to the terminus in Tacoma.

The Harveys made their first home in the barn of Charles’s next employer, James H. Booker, in the Denny Regrade district.  When Eva became pregnant with their first child, the Harveys found a small apartment in downtown Seattle.  Gertrude Harvey was born there in October 1888.

In June 1889 the Harveys experienced the Great Seattle Fire.  Charles Harvey’s carpentry work took him to a home on Queen Anne Hill then at the northern edge of Seattle and the highest point in the city.  Looking down into the heart of the city, Harvey saw smoke and flames that appeared to be uncomfortably close to his family’s apartment.  Running all the way from Queen Anne Hill, Charles Harvey was shocked and relieved to find his wife, Eva and their baby daughter, Gertrude, sitting on the front porch of their building calmly watching the fire.

Seattle’s oldest African American church, First African Methodist Episcopal (AME) began in 1886 as a Sunday School held in various homes.  By 1890 churchmembers established the first church building on what was then called Jones Street.  Charles Harvey was one of the charter members.   He used his skills as a carpenter and painter to help construct the church building which still stands.  His name is engraved on the cornerstone of the historic building located at 14th and Pine Streets in Seattle.  Harvey organized the first church choir, with his daugher, Gertrude, as the organist.

After the Seattle Fire the family looked for new lodgings far from the downtown area.  Charles Harvey found an apartment over a grocery store on the corner of what is now 29th Avenue and John Streets where their first son was born.  The Harvey family continued to grow, and with each additional child, came a larger residence until Harvey decided his family needed a home of their own.  In 1902 Harvey built the family home on 29th Avenue North (now East) in Madison Valley in where the two youngest (of eight) children were born.  Charles Harvey eventually built ten homes in the area.