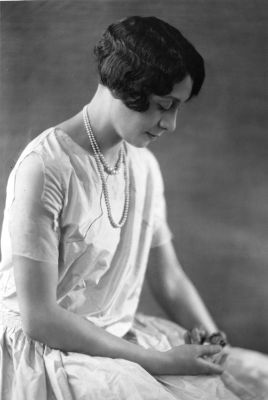 Vivian Gordon Harsh was the first African American librarian in the Chicago Public Library system and a significant contributor to Chicago’s Black Renaissance.  In 1932 she was appointed head librarian of the George Cleveland Hall Branch, the city’s first library built in an African American community. During her career, Harsh developed a black history collection that would become a world-renowned resource for residents and scholars.

Harsh was born on May 27, 1890 in Chicago to Fenton and Maria (Drake) Harsh, both graduates of Fisk University. Fresh out of high school, Vivian Harsh began work in 1909 as a junior clerk at the Chicago Public Library where she would remain during her 60-year career. In 1921, she received her B.A. in library science from Simmons College in Boston, Massachusetts, and later took advanced courses at the University of Chicago Graduate School of Library Science.

In 1924 she became the city’s first black professional librarian. Through her involvement with The Association for the Study of Negro Life and History founded by Carter G. Woodson, Harsh recognized the need for library services on Chicago’s south side, the heart of the city’s African American community. Funding from philanthropist Julius Rosenwald allowed Harsh to visit African American collections in other U.S. cities, providing the basis for the George C. Hall branch that opened in the Bronzeville neighborhood in 1932 with Harsh as its director.

Harsh and Charlemae Rollins, a children’s librarian, developed the branch’s substantial African American resources along with programming specifically for the black community. The collection began with over 100 books on African-Americana donated by George Bentley, founder of the Chicago branch of the National Association for the Advancement of Colored People (NAACP).  Operating in the 1920s without funding from the Chicago Public Library, Harsh expanded the collection through private donations and her personal contributions.

The library itself became a Mecca for literary and cultural icons of the period including Richard Wright, Langston Hughes, Zora Neal Huston, and Gwendolyn Brooks, some of whom contributed manuscripts to the institution. The resources first accumulated by Harsh and Rollins in the 1920s have grown into the Vivian G. Harsh Research Collection of Afro-American History and Literature, the largest of its kind in the Midwest and currently located at the city’s Carter G. Woodson Regional Library. It includes 70,000 books and unique materials like the historic Illinois Writers Project “Negro in Illinois” paper.

In 1958, after a serious illness, Harsh retired from the Chicago Public Library. She died two years later at the age of 70.  In 2005, a city park near Harsh’s childhood home was named in her honor.