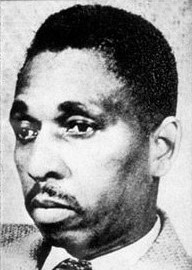 Harry Tyson Moore was an African American civil rights leader and founder of the Brevard County, Florida chapter of the National Association for the Advancement of Colored People (NAACP). He also served as president of the state chapter of the NAACP. On December 25, 1951, Moore and his wife, Harriette Simms Moore, were victims of a bombing by the Ku Klux Klan at their home in Mims, Florida.

Harry T. Moore was born on November 18, 1905 in Houston, Florida to Johnny and Rosa Moore. Moore’s father died when he was nine years old. Unable to take care of her son, Rosa Moore sent him to one of her sisters in Daytona Beach, Florida in 1915. He later moved to Jacksonville, Florida to live with three other aunts, Masie, Jessie, and Adrianna, for three years. In 1919, Moore enrolled in a high school program at Florida Memorial College (now Florida Memorial University). He graduated from Florida Memorial College in 1925 and accepted an elementary school teaching job in Cocoa, Florida, where he remained for two years.

During this time, he met Harriette Vyda Simms, another teacher, and the couple married in 1926. Moore was promoted to principal of Titusville Colored School, where he taught ninth grade while supervising a staff of six teachers. In 1928, the couple gave birth to their first daughter, Annie Rosalea, and two years later to a second daughter, Juanita Evangeline.

In 1934, Moore founded the Brevard County NAACP chapter and three years later filed a lawsuit to equalize black and white teachers’ salaries in the state. Despite the support of the all-black Florida State Teachers Association and renowned NAACP attorney Thurgood Marshall, Moore lost the lawsuit.

In 1941, Moore organized the Florida State Conference of the NAACP, and in 1944, he organized the Progressive Voter League. His leadership of this organization led to the registration of 116,000 new black Florida registered voters. In June 1946, Moore became a full-time, paid organizer for the Florida NAACP. He and his wife had been fired from their teaching jobs because of their civil rights activities.

On December 25, 1951, as the Moores were celebrating their twenty-fifth wedding anniversary, a bomb that had been planted under their home exploded. Henry Moore died on his way to the hospital, and Harriette Moore died nine days later. Their deaths led to protests across the nation. It was later discovered that four high-ranking Florida Ku Klux Klan members, Earl J. Brooklyn, Tillman H. Belvin, Joseph N. Cox, and Edward L. Spivey, planted the bomb under the couple’s home. By the time the evidence was uncovered, however, the men were deceased. Officially, the crime remains an unsolved case.