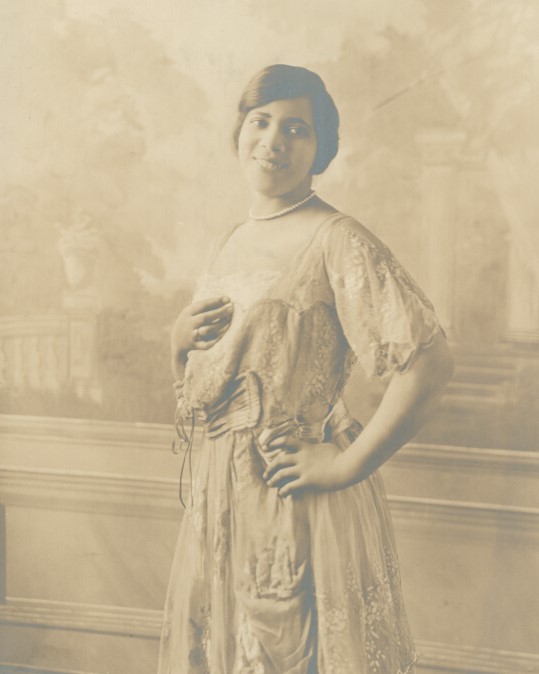 Hazel Harrison, pianist, was born on May 12, 1883 in La Porte, Indiana to parents Hiram and Olive Harrison. Hiram was the co-owner of a barber shop and Olive was a hairdresser and manicurist. Hazel Harrison began playing the piano at the age of four, and by age eight she was earning extra money for the family by playing at local parties and dances. Harrison graduated from La Porte High School in 1902. She was married to beauty product salesman Walter Bainter Anderson from 1919 to the late 1920s, and to Alabama businessman Allen Moton in the late 1950s. Both marriages ended in divorce.

Upon graduating high school, Harrison continued to earn money playing concerts and dances in La Porte and Chicago. In 1904 she was asked to play with the Berlin Philharmonic Orchestra, making her the first American to play with a European orchestra whose entire education had taken place in America. After she came back to the United States Harrison performed a recital at Kimball Hall in Chicago in 1910. A music critic issued a plea to the music community to sponsor her to go to Germany to continue her education, and she received financial assistance from several prominent classical musicians. She was able to travel to Berlin in 1911 to study with accomplished pianist Hugo van Dalen. Van Dalen encouraged his students, including Harrison, to improve their music skills by exploring the local cultural scene. On this advice, Harrison spent much of her time in Germany studying German painting, literature, and philosophy.

Harrison returned to the United States and began a series of recitals and concerts in major cities including New York, Chicago, and Boston. Her fame rose significantly during this period, and though she was recognized for her talent she was not offered any positions with major orchestras because of her race.  A 1922 Chicago reviewer said “She is extremely talented…it seems too bad that the fact that she is a negress may limit her future plans.” She played for special events with orchestras, such as the Minneapolis Symphony and the National Association of Negro Musicians convention.

Harrison retired from Howard in 1957 and moved first to New York City and then La Grange, Georgia in 1965. At the end of her life she became immersed in reading philosophy, continued to teach, and played small shows for groups of friends. She passed away on April 28, 1969 in Washington, D.C. after suffering from congestive heart failure.