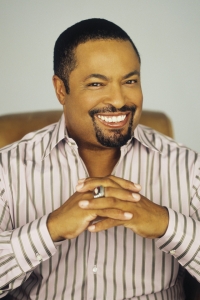 New York Times bestselling author Everette “E” Lynn Harris was born June 20, 1955, in Flint, Michigan. Openly homosexual, Harris was best known for his depictions of gay African American men who were concealing or “closeting” their sexuality. Although he did not participate in gay rights activism, Harris introduced millions of readers to the “invisible life” of gay black men.

Harris grew up in Little Rock, Arkansas, with his father, Ben Odis Harris, a sanitation truck driver; his mother, Etta Mae Williams, and three sisters. Harris endured a difficult childhood as his father taunted him for wanting to become a teacher while his mother suffered physical abuse. After his parents divorced in 1970, Harris discovered and was reunited with his biological father, James Jeter. The reunion, however, was short-lived, as Jeter died in an automobile accident a year later.
Harris found refuge and success in his educational pursuits. He attended the University of Arkansas at Fayetteville and was the school’s first black yearbook editor, the first black male cheerleader and president of his fraternity. He graduated with honors in 1977 with a BA in journalism.

Harris spent the next 13 years as a salesman for IBM, Hewlett-Packard, and AT&T.  In 1990, suffering from depression and alcoholism, he attempted suicide and the following year quit his highly successful sales career to pursue writing. His first novel, Invisible Life (1991), was self-published and was sold out of the trunk of his car. In 1994, the novel was discovered by Anchor Books and was published as a trade paperback.

After his first novel, Harris wrote ten consecutive books that made the New York Times bestseller list, making him among the most successful African American or gay authors of the late 20th and early 21st centuries.  His works include If This World Were Mine (1998), winner of the James Baldwin Award for Literary Excellence, and his autobiographical What Becomes of the Brokenhearted: A Memoir (2004). Harris was also a member of the board of directors of the Hurston/Wright Foundation and was founder of the E. Lynn Harris Better Days Literary Foundation, a non-profit group that provides support to aspiring writers and artists.

On July 23, 2009, while on a business trip to Los Angeles, Harris died due to complications from heart disease. His last novel, Mama Dearest, was published posthumously three months later.