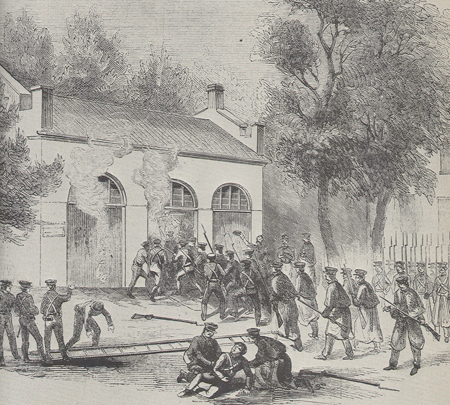 On October 16, 1859, in the town of Harpers Ferry, Virginia (now West Virginia) John Brown, an ardent abolitionist, and 21 other men raided a Virginia armory to seize weapons for a planned slavery insurrection. Civilians in the town were alerted when they heard gunshots and news spread that the armory had been captured, they assembled the militia to counterattack the building.  Later the United States government sent in Marines led by Colonel Robert E. Lee to quash the insurgent takeover.  Escape routes were cut off and the military recaptured the armory.  In the course of the raid ten of Brown’s men were killed; seven, including Brown himself, were captured, and five escaped.

Brown intended to use the armory’s weapons to give to the slaves whom he envisioned would rise up for their freedom.  They would then establish a mountain retreat for those freed.  Brown had been collecting money from rich abolitionists three years before the planned raid.  He also sought additional resources to create a freed slave community. Brown hoped his liberation of thousands of slaves would undermine their value as property and thus force slaveholders to end the institution of slavery.

Brown was tried and found guilty of treason against the Commonwealth of Virginia. He was sentenced to death by hanging in Charles Town on December 2, 1859. The Harpers Ferry raid greatly affected the future direction of the abolitionist movement. Before the raid, anti-slavery movements were generally pacifist and non-violent, but after October of 1859, abolitionists, even when they denounced Brown’s abortive raid, nonetheless called for a more aggressive stance to slavery.  Many historians see the Harper’s Ferry raid as the catalyst, along with Abraham Lincoln’s election one year later, for the South’s secession from the Union and the beginning of the Civil War.