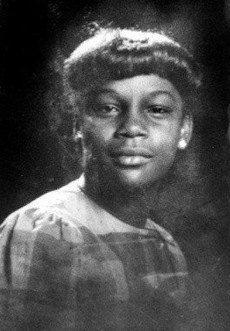 Latasha Harlins, whose short life came to a violent end in the midst of racial tensions in Los Angeles, California, became a major spark for the 1992 Los Angeles Riots. Harlins was born on July 14, 1975 in East St. Louis, Illinois, to Crystal Harlins and Vester Acoff Sr. Acoff never met Latasha.  Latasha’s younger brother, Vester Acoff Jr. was born in 1979, and her younger sister, Christina, was born in 1981.

The family moved from Illinois to South Central Los Angeles in 1981 when Latasha was six years old. They rented a place near 89th Street and Broadway, just a few blocks from where Latasha would later be murdered. Latasha’s mother, Crystal, who worked as a waitress in a local tavern, was found brutally shot on November 27, 1985, in a Los Angeles nightclub. The children’s maternal grandmother, Ruth Harlins, then raised Latasha and her siblings.

By the late 1980s, racial tensions were high in South Los Angeles, and especially between Korean storeowners and African American residents of the city. After the change in national immigration laws in 1965 a large number of Korean immigrants arrived in Los Angeles and by 1968 the first Korean-owned market opened in South Central LA. The area was recovering from the recent Watts Riots and Koreans began buying businesses because they were inexpensive and there wasn’t much competition. Longtime African American residents in the area at first welcomed the Koreans but eventually grew angry with them because they refused to hire black employees and often treated their customers poorly. By 1990, 65% of South Central businesses were Korean-owned and a 1992 survey of these storeowners revealed considerable racial prejudice against black customers and black people in general.  Koreans in response argued that their attitudes evolved from high crime rates in the area and shop owner fears of shootings and burglaries.

Latasha Harlins became a victim of these racial tensions on the morning of Saturday, March 16, 1991. She entered Empire Liquor, which was owned by a Korean family, to purchase a bottle of orange juice.  As she approached the counter, Soon Ja Du, one of the storeowners, accused her of stealing after seeing Harlins place the bottle in her backpack, despite her holding the $2 payment for the $1.79 price of the juice and approaching the counter to pay. Du grabbed the bag and the two women had a violent scuffle. Harlins threw the juice bottle back on the counter and turned to leave the store when Du pulled a .38-caliber handgun and shot 15-year-old Harlins in the back of the head.

Du was arrested and her trial was held on November 15, 1991. Security-camera footage which showed Harlins’ attempt to pay for the juice and the subsequent scuffle between the two women convinced a jury to find Du guilty of voluntary manslaughter and call for the maximum 16-year jail sentence.  Judge Joyce Karlin, however, rejected the jury’s recommendation and instead sentenced Du to five years probation, 400 hours of community service, and a $500 fine.

The judge’s decision exacerbated racial tensions between African Americans and Korean immigrants. This tension, along with the beating of Rodney King by Los Angeles police on March 3, 1991, became a catalyst for the 1992 Los Angeles riots.  Du’s store was looted, set on fire, and never reopened. Judge Karlin also became a target for numerous protests and later stepped down from the bench.  The Harlins family received a $300,000 settlement from Du’s insurance company.