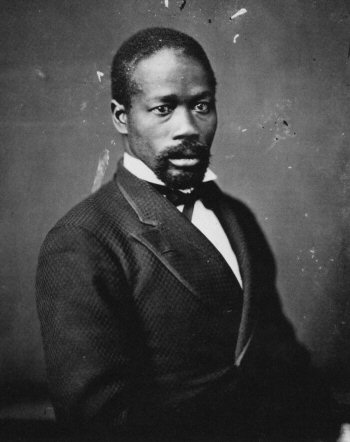 Jeremiah Haralson was born near Columbus, Georgia on April 1, 1846. The slave of Georgia planter John Haralson, he was taken to Alabama where he remained in bondage until 1865. It is unclear as to what he did in the earlier years of his freedom, but there are records that suggest he may have been a farmer and clergyman. Haralson taught himself to read and write and later became a skilled orator and debater.

Congressman Jeremiah Haralson supported the policies of President Ulysses Grant and urged black voters to remain loyal to the Republican Party.  Appointed to the House Committee on Public expenditures, he introduced legislation to use proceeds from public land sales for educational purposes and for the relief of the Medical College of Alabama. Haralson broke with other Republican-era black Congressmen by criticizing the use of federal soldiers to control violence and ensure orderly voting in the South.  He also favored general amnesty for former Confederates.

In 1876 Haralson stood for election in the newly created, predominately black Fourth Congressional District.  This district was already represented by black Congressman James T. Rapier.  Both he and Haralson ran in the Republican Primary.  Haralson won the primary but lost narrowly to Democrat Charles M. Shelley.  Haralson contested the results before the House of Representatives but on this occasion, the House ruled in favor of his Democratic opponent, Charles M. Shelley.

Haralson ran against Shelley again in 1878 but lost.  After the defeat, he left Alabama and held a succession of minor governmental jobs for the next two decades.   In 1879 he became a clerk at Baltimore’s Federal Customs House.  He later held a similar post in the Department of the Interior in Washington, D.C.  Then he worked for the Pension Bureau in Washington from 1882 to 1884.  In 1904 he went to Arkansas, where he worked as a pension agent for a brief time.  In 1912 Haralson returned to Alabama and settled in Selma, but soon thereafter began drifting to different places. He went to Texas, then to Oklahoma, and Colorado, where at the age of 70 he took up coal mining. In 1916, Haralson was killed by wild animals near Denver.