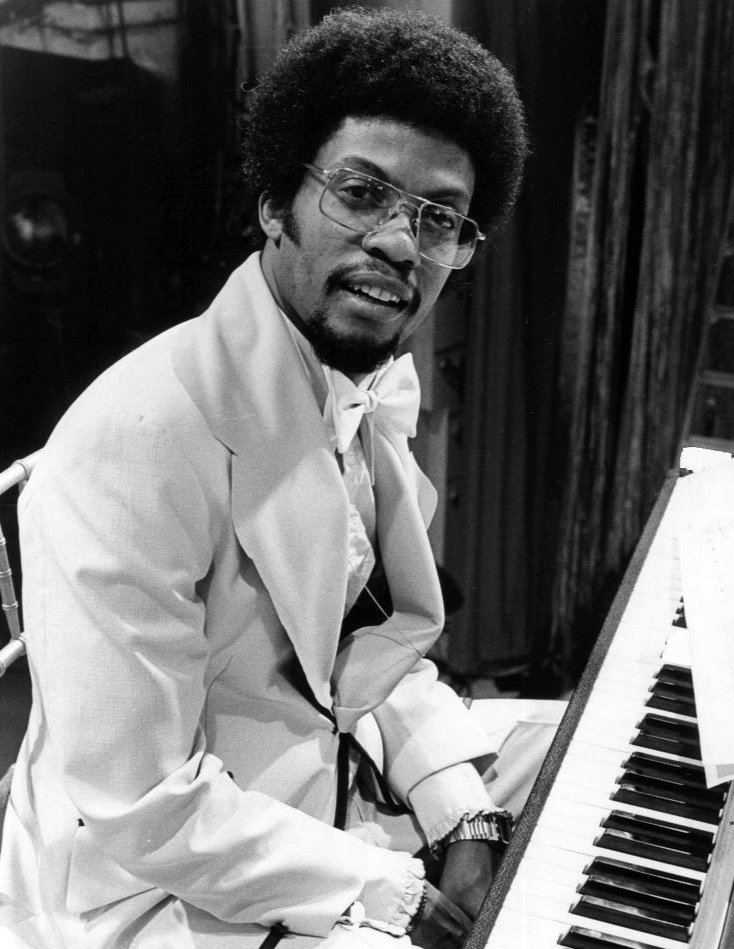 Herbert “Herbie” Julian Hancock is an African American pianist, composer, bandleader, and keyboardist, with a career spanning over five decades.  Hancock was born on April 12, 1940 in Chicago, Illinois, the son of Winne Belle Griffin, a secretary and Waymand Edward Hancock, a government meat inspector. At the age of seven Hancock began his musical education with the piano. Considered a child prodigy, Hancock performed at age 11 with the Chicago Symphony Orchestra. He attended Wendell Philips High School, Roosevelt University, and Grinnell College, where he double majored and received degrees in Engineering and Music in 1960.

Hancock recorded his first album in 1962. He then joined the Miles Davis Second Great Quintet and performed with them from 1963 to 1968, while recording dozens of sessions with other musicians. He signed with Warner Brother Records and soon afterwards composed the soundtrack for Bill Cosby’s “Fat Albert and the Cosby Kids” TV series.  During that recording he became fascinated with musical gadgets and toys, which led to his ventures into electronic music.

Hancock’s first venture into electronic music came in 1971 when he and his sextet made the first of three albums that became known as the “Mwandishi” albums, so-called after a Swahili name Hancock sometimes used during this era (Mwandishi is Swahili for writer). Looking to do more with his music, Hancock in 1973 formed a new band, The Headhunters, and released three more albums. The first Head Hunters album was the first jazz album to reach platinum status (over one million albums sold and over two million singles from that album).

During the late 1970s and early 1980s, Hancock toured with his V.S.O.P. Quintent. During this period he released albums in Japan that have yet to appear in the United States.  In 1980, Hancock introduced trumpeter Wynton Marsalis to the world as a solo-artist, by producing his debut album. A later collaboration with Marsalis on the album “Future Shock” also reached platinum.

Hancock also produced soundtracks for the movies Blow Up, The Spook Who Sat by The Door, and Death Wish. In 1986 he won an Oscar for the score to the movie Round Midnight. He has had numerous television appearances that eventually led to hosting assignments on the TV programs Rock School and Coast to Coast.

Throughout his career, Hancock collaborated with artists from various musical genres such as Chick Corea, Joni Mitchell, Stevie Wonder, Sting, Annie Lennox, and Kathleen Battle. Those collaborations as well as solo albums have earned Hancock numerous honors including Grammys and awards such as the Soul Train Music Award, the Kennedy Center Honors, and Lifetime Achievement Awards.  In 2014 he was the Norton Professor of Poetry at Harvard University.

Hancock was recently named by the Los Angeles Philharmonic Orchestra as Creative Chair for Jazz and he currently serves as Institute Chairman of the Thelonious Monk Institute of Jazz. He is also a founder of The International Committee of Artists for Peace, and was recently awarded the “Commandeur des Arts et des Lettres” by French Prime Minister Francois Fillon. In July of 2011 Hancock was designated an honorary UNESCO Goodwill Ambassador.

Since 1972, Hancock has practiced Nichiren Buddhism, reciting the Buddhist chant Nam Myoho Renge Kyo each day. Hancock has been married to his wife Gigi for 42 years and together they have one daughter Jessica. The family resides in Beverly Hills, California.