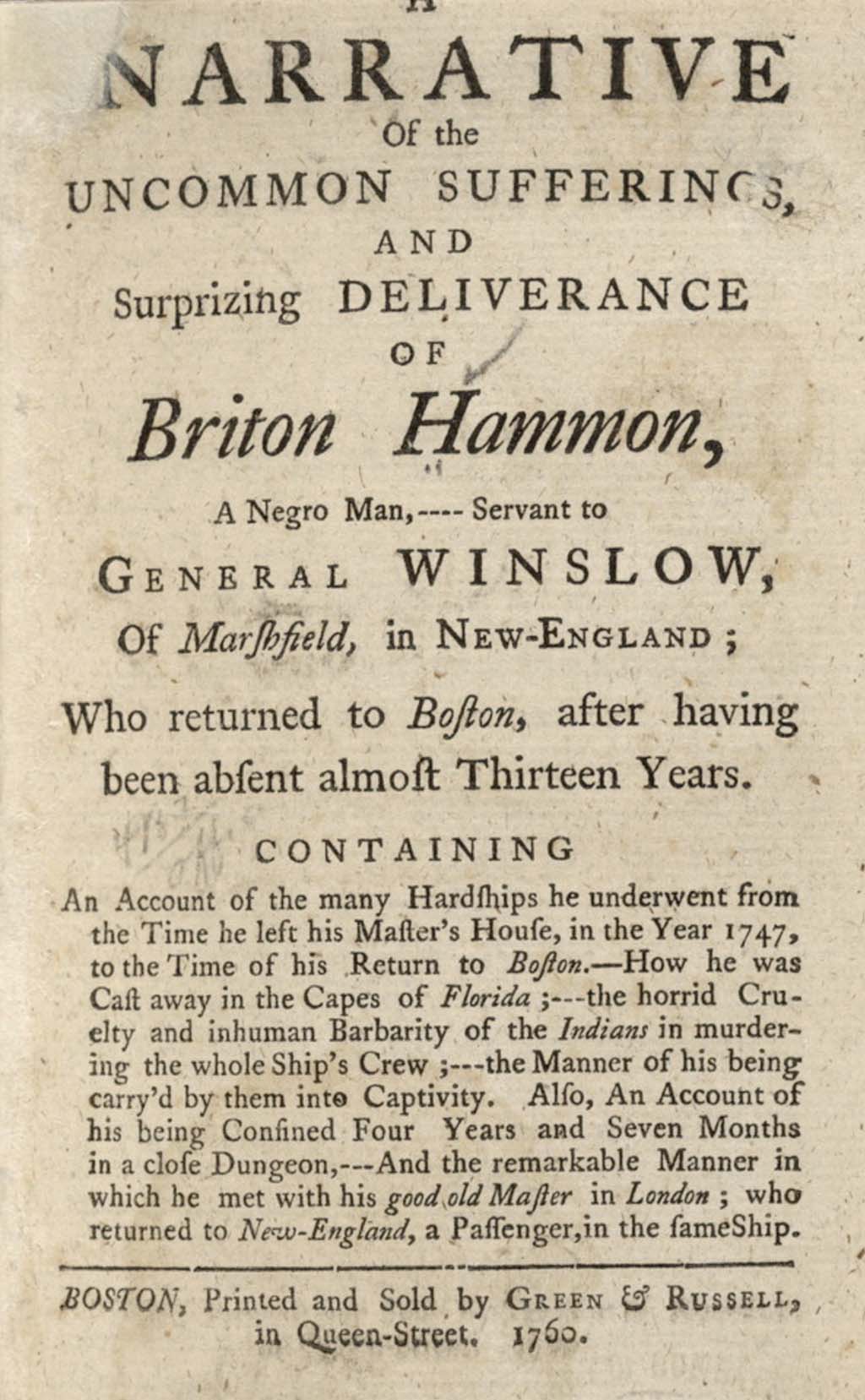 Briton Hammon, whose birth and death dates are unknown, was the author of A Narrative of the Uncommon Sufferings, and Surprizing Deliverance of Briton Hammon, A Negro Man, considered to be the first published autobiography by a black American. Hammon is thought by scholars to be have been a slave in Marshfield, Massachusetts. His book, dictated to an amanuensis-editor, was an autobiographical slave narrative published in Boston in 1760 by Green and Russell, the foremost printer in the city at the time. Little is known of Hammon’s life outside of the facts he relates in the text.

In the Narrative, Hammon describes himself as a “servant” of General John Winslow, though Hammon’s references to Winslow as his “Master” suggest that he was a slave. His prose details a 1747 sea voyage upon which he embarked, with Winslow’s consent, from Plymouth, Massachusetts destined for Jamaica. However, on the return voyage, the ship became stranded on the coast of Florida, and Hammon was captured by a Native American tribe that subsequently murdered the ship’s crew members.

Hammon was rescued from his Native American captors by a Spanish captain who paid ten dollars for him and took him to Havana, Cuba. In Havana, Hammon was sold to Governor Francisco Cajigal de la Vega, and lived in his residence, Castillo de la Real Fuerza, until he was captured by a press gang, ordered to serve on a royal ship, and jailed for refusing. He was imprisoned for close to five years before being freed by the Governor, and spent the next year trying to escape Havana on a British ship.

After a series of failed attempts, Hammon successfully boarded a Jamaica-bound British vessel and joined the crews of the Sandwich and then the Hercules. On the latter he was wounded during a battle with the French. Discharged from the service due to his injuries, he was paid for his labor and sent to Greenwich Hospital in London to recover. After regaining his health and serving a stint as a cook on a Navy ship, he returned to London and fell ill with a fever. The six-week convalescence left him destitute. Hearing of a ship setting sail for Massachusetts, Hammon joined the crew as a cook. Three months into the voyage, he discovered that Winslow was on board. Hammon’s Narrative concludes with the author’s reunion with Winslow.

It is likely Hammon embellished some of the details he recounted, as parts of his story are unusual or inconsistent with other known facts. For instance, scholars question whether Native Americans in Florida during the mid-18th century would speak the “broken English” Hammon describes. Details such as these were popular features of Native captivity tales at the time, and Hammon may have included them to enhance his story’s appeal for his audience.

Though later and better known slave narratives were closely connected with the abolitionist movement, Hammon’s depiction of his relationship with Winslow is overwhelmingly positive, and the conclusion has him recounting his joy at being reunited with his “Good Old Master.” However, Hammon portrays negatively his captivity at the hands of the Native Americans and Spanish, making an implicit, though not necessarily conscious, critique of slavery. Two copies of Hammon’s 14-page pamphlet are still in existence; one in the Library of Congress and the other in the New York Historical Society. Hammon’s time and place of death are unknown.