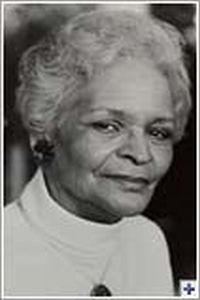 Grace Towns Hamilton was the first African American woman elected to the Georgia General Assembly.  She was a lifelong advocate of rights for the disadvantaged, and was instrumental in key district reapportionment efforts and black voter registration that helped bring minority representation into Georgia politics.

Hamilton was born in Atlanta, Georgia on February 10, 1907 to Harriet McNair and George Alexander Towns. Her father was a professor of English and pedagogy at Atlanta University. Hamilton was educated from grade school to college on the Atlanta University campus, from which she received an undergraduate degree in 1927. Hamilton left Atlanta to attend Ohio State University where she received a master’s degree in psychology in 1929.

Hamilton returned to Atlanta in 1929 to take a position as an assistant professor at Clark College (now Clark-Atlanta University) where she taught psychology. While there she met her future husband Henry Cooke Hamilton who was a fellow faculty member. The couple married in 1930 and had one daughter born in 1931.

In 1931, Grace and Henry Hamilton moved to Memphis, Tennessee where they taught at Le Moyne College. In 1941 they moved back to Atlanta when Henry was selected to head Atlanta University’s high school program. Instead of returning to teaching, Grace Hamilton was appointed executive director of the Atlanta Urban League (AUL) in 1943, becoming one of the first women to hold such a post in the National Urban League. Hamilton focused on working within the confines of segregation to improve schooling, housing, health care and voting rights for African Americans. However, her seeming acceptance of racial segregation led to her resignation in 1960.

In 1965, Hamilton and seven African American men were elected to the Georgia Legislature, representing newly-reapportioned districts with significant numbers of African Americans voters. The special election came as a result of a 1962 U.S. Supreme Court decision that increased the power of urban areas and created the dramatic growth of black registered voters in the city. Hamilton was one of the leaders in that voter registration campaign.

Hamilton represented her inner city Atlanta district from 1965 to 1985. While in the legislature she worked continuously to expand political representation for African Americans across the state. She was the principal architect of the 1973 Atlanta City Charter, which for the first time allowed blacks to be elected to the city council from districts. She also led a congressional reapportionment battle that placed most Atlanta blacks in the Fifth Congressional district. Andrew Young, who in 1972 became the first black Congressman from the new district, credited Towns with making his election possible.

Hamilton lost her seat in 1985 however when she sided with white leaders and refused the demands of black leaders in the early 1980s to insure that the Fifth Congressional District become gerrymandered into a black majority district. After her defeat Hamilton served as an advisor to the U.S. Civil Rights Commission (1985-1987).