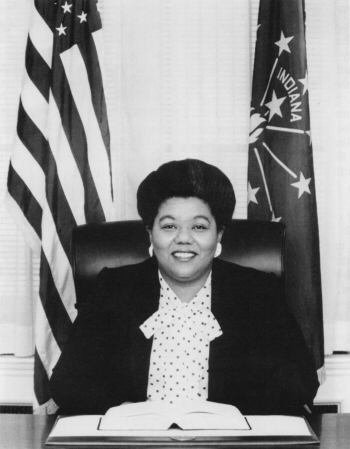 Democratic representative Katie Hall was elected to the United States Congress in 1983. Born in Mound Bayou, Bolivar County, Mississippi in 1938, she attended Mississippi Valley State University and Indiana University before teaching in the public schools of Gary Indiana. Hall was elected to the Indiana State Legislature in 1972, and then to the Indiana State Senate in 1974, a position she was continually reelected to until 1983 when she campaigned for Congress from Indiana’s First Congressional District which is mostly Gary and the northwestern corner of the state.

Hall was nominated to run as a representative by the Democratic Party when Congressman Adam Benjamin died in office in 1982 shortly after winning reelection. Through a well organized six week campaign, Hall achieved an impressive 60% of the votes in the 1983 special election to become First District Representative, winning 97% of the black vote and a surprising 51% of the white vote.

Hall’s goals in office were to support a working-class constituency, to fight the rising unemployment in her district, and to combat high military spending and governmental support of big business over small businesses and the working class. Once in Congress, she became chairperson of the Census and Population Subcommittee, and of the Civil Service and Post Office committee. She is famous for having introduced the bill to make Martin Luther King Jr., birthday a national holiday. Representative John Conyers Jr. had first introduced legislation for the holiday days after Dr. King’s assassination in 1968. However it was Hall’s final version of the bill was passed into law in 1983.

Despite her striking victory in the 1983 special election, Hall did not win her bid for re-nomination in 1984 Democratic primary. Mrs. Hall blamed her failure on racism; however the 1984 campaign was weakly organized, and despite the symbolism of the King bill success, voters saw little economic progress during Hall’s term. She failed to win the support of the black community, losing by over 4,800 votes in the eight neighborhoods with majority black populations. Democrat Peter J. Visclosky was elected instead.

After 1984 Hall remained active in political and civic affairs, and was vice-chair of the Gary Housing Board Commissioners and a state senator from the Third District of Indiana.