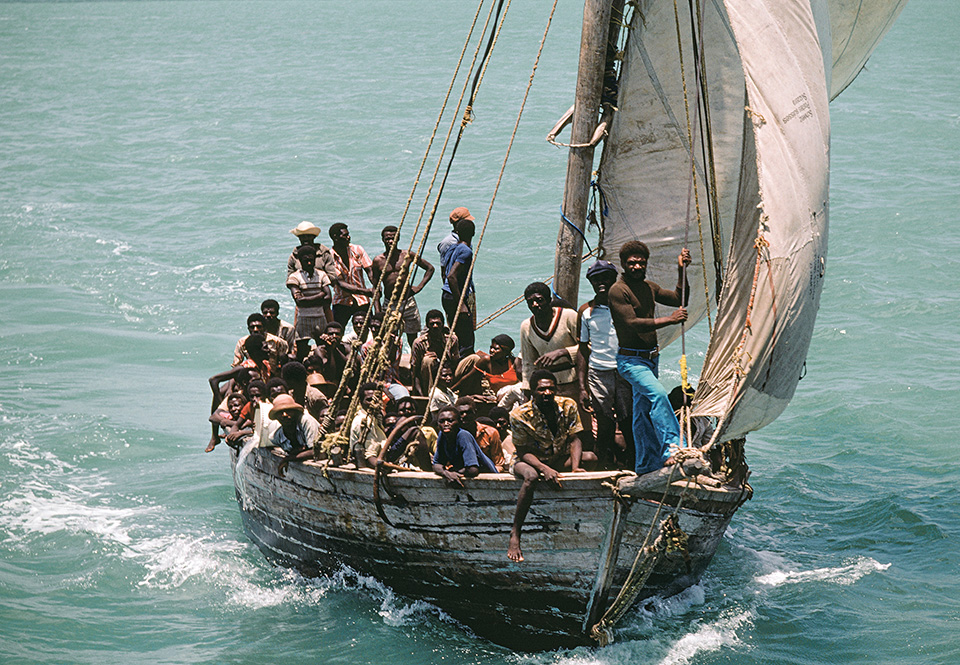 Although Haïtien individuals have been coming to what is now the United States both as enslaved and free people since the colonial era, the single largest group of Haïtien immigrants arrived in 1972, thus initiating a movement that continues to this day. In 1972 thousands of Haïtien refugees arrived by boat in South Florida seeking political asylum from the persecution of Haïtien dictator Jean Claude “Baby Doc” Duvalier who followed his father as the ruler of that nation. The boat migration most often included small groups who traveled by sea from Haïti to South Florida, a distance of 700 miles. One example of these boat people were the 42 Creole-speaking Haïtien men, 20 women, and three children who jumped ashore on the Florida coast at dawn on December 12, 1972 after sailing to Cuba and the Bahamas in a three‐week journey aboard a leaking 56‐foot sailboat. They had only the clothes on their back but they were assisted by Cuban and Bahamian residents along the way who gave them temporary shelter, clothing. and water.

Upon landing by boat on American soil, most Haïtiens arriving in South Florida were met by authorities and immediately transported to Immigration and Naturalization Service (INS) for processing. They waited here as the federal government decided whether to allow them to stay in the United States or to return Haïti where they were sure to be met with reprisals and possible death.

Although the United Nations Convention and Protocol protect a refugee by prohibiting contracting states from expelling anyone to territories where he would be subject to persecution, the U.S. does not categorize Haïtiens as “political” refugees.” Instead, they are deemed “economic refugees” and thus could be deportation without due process of law. Scholars and supporters of Haïti and Haïtiens claimed and demonstrated that the American Government was unfair regarding hearings for asylum because of their ethnicity. In other words, the U.S. Government was said to be basing their decision on ethnicity rather than the treatment that the Haïtiens were receiving from the right-wing dictatorial Duvalier regime.  Ironically, refugees from Communist nations or Communist-sympathizing nations such as Cuba, easily found entry into the United States.

Despite these challenges Haïtiens continued to flee to the United States. By 1980, between 300,000 and 400,000 Haïtiens had entered the U.S., even though Haïtiens arriving by boat were still detained in Florida and a majority of these boat people were deported back to Haiti. In order to stem the tide of Haïtien refugees, the U.S. Coast Guard was assigned to patrol the Caribbean and to intercept and return to Haiti refugees found on the high seas.

By 1992 Haïtien boat people were regularly returned to Haïti without allowing the vast  majority of them to plea for political asylum. The U.S. government’s behavior sparked a backlash as pro- Haïtien refugee demonstrations spread across the nation. Groups like Amnesty International continue to maintain that Haïtiens should be treated as political refugees even as U.S. policy calls for baring their entry or deporting those who reach U.S. shores. The most recent example of this problem came in 2021 when thousands of Haïtien refugees who had been living in Mexico and Central and South American nations, made a bold attempt to cross the Rio Grande into Del Rio, Texas.  Many were turned back while others were allowed to stay and seek asylum.

Despite the efforts to stop their emigration, in 2019 the U.S. Census counted 1,084,055 Haïtiens residing in the U.S. They were the fourth-largest foreign-born group from the Caribbean in the country and the largest Haïtien-born population outside the nation of Haïti. Many of these refugees or descendants of refugees have created vibrant communities in South Florida and New York City.  Prominent Haïtien-Americans include singer Wyclef Jean, artist Jean-Michel Basquiat, writer Edwidge Danticat, former Utah Congresswoman Mia Love, and current Florida Congresswoman Sheila Cherfilus-McCormack.