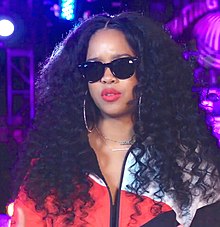 Hear a soundtrack specially chosen to enhance your learning about H.E.R. / Gabriella Wilson (1997- )

Singer and songwriter known by the stage name H.E.R. was born Gabriella Sarmiento Wilson on June 27, 1997, in Vallejo, California. Wilson is of mixed ancestry, as her mother, Agnes, is Filipino, and her father, Kenny, is African American. Her father was a member of a soul band called Urban Bushmen, and Wilson learned how to play several instruments while he practiced. She became a child prodigy, joining her father in his band, singing background vocals, and playing instruments by the age of 7. Wilson performed at the Apollo Theatre in New York when she was 9 years old and began being professionally managed by singer/actor Will Smith’s Overbrook Entertainment company. Her acting debut was in the Nickelodeon network film, School Gyrls (2009).

Wilson performed at the 2010 BET awards and the ASCAP awards and competed in Radio Disney’s “Next Best Thing” competition at the age of 12. She was signed to her first contract with RCA Records in 2011, when she was 14. Using her real name, Wilson released her first single, “Something To Prove.” After taking a few years to develop her style, and graduate from high school, she reemerged in 2016 as H.E.R. The acronym stands for “Healing Over Everything.” Her debut extended play (EP) H.E.R. Vol 1 (2016), and second EP, H.E.R. Vol 2 (2017), received critical acclaim from her label mates Alicia Keys and Bryson Tiller, and Wilson went on tour, headlining for Tiller. Both EPs have been certified gold, after selling over 500,000 copies worldwide.

In her young career, Wilson has won five Soul Train Music Awards, four Grammy Awards, two BET Awards, an iHeartRadio Award, two MTV Music Awards, an Academy Award, and an NAACP Image Award. Her fan following included Prince, who contacted her before his untimely death, and Janet Jackson, who attended one of Wilson’s concerts in London. Wilson released her first studio album, Back Of My Mind, in 2021. She will make her major film debut in upcoming Blitz Bazawule’s adaptation of The Color Purple, set to hit screen in 2023.