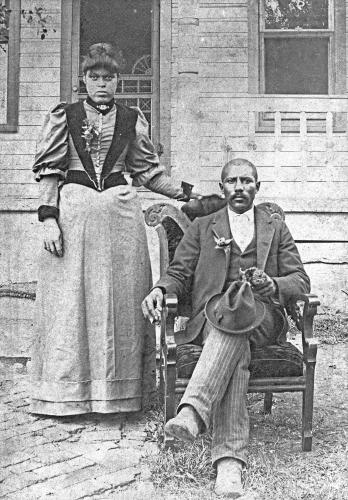 Junius G. Groves, a successful, self-educated farmer, landowner, and entrepreneur, became one of the most prosperous African American men in the early twentieth century. He was born enslaved on April 12, 1859 in Green County, Kentucky.  His parents were Martin Groves and Mary Anderson Groves. Two decades later, as a freedman possessing ninety cents, Groves made his way to eastern Kansas during the time of the Exoduster Movement of ex-slaves from the South.  Groves began farming by sharecropping near Edwardsville, Kansas.  In 1880, he married Matilda E. Stewart of Kansas City, Missouri. Within a few years, they began purchasing their own land.

Much of Groves’ success was due to his forty-six years of devotion to the science of agriculture. He earned the title “Potato King of the World” in 1902 for growing the most bushels of potatoes per acre than anyone else in the world up to that point in time. The couple’s twelve surviving children (out of fourteen births) helped with the farm and family holdings.

Besides producing potatoes on his own farms, Groves, by 1900, bought and shipped potatoes, fruits and vegetables extensively throughout the United States, Mexico, and Canada. The family also owned and operated a general merchandise store in Edwardsville, possessed stock in mines in Indian Territory and Mexico, stock in Kansas banks, and majority interest in the Kansas City Casket and Embalming Company. Junius Groves co-founded the State Negro Business League and later served as its President.  He also founded the Pleasant Hill Baptist Church Society in 1886.  He was also elected secretary of the Kaw Valley Potato Association in 1890 and Vice President of the Sunflower State Agricultural Association in 1910 as well as a cofounder of both organizations in those years.

Junius Groves surpassed financial parity with most whites in contemporary Kansas and in the process combated racism by example and by providing economic opportunities to blacks and whites with a particular emphasis on uplifting his race. During the busy farming season, for example, Groves employed up to fifty mostly black laborers. He founded Groves Center, an African American community near Edwardsville in the early 1900s.  He also established a golf course for African Americans, perhaps the first in the United States.

Junius Groves was one of the wealthiest African Americans in the nation by the first decade of the 20th Century.  His holdings were estimated to be worth $80,000 in 1904 and $300,000 by 1915.  The Groves family mansion, a 22-room brick home, complete with electric lights, two telephones, and hot and cold running water in all of the bedrooms, was the largest in the area and had its own railroad spur.  Junius Groves died in Edwardsville in 1925.  In 2007, Groves was honored by his descendants, the Votaw Colony Museum, an organization honoring the Exodusters and their descendants, and the city of Edwardsville.  He was also inducted into the Bruce W. Watkins Cultural Heritage Center Hall of Fame in nearby Kansas City, Missouri.