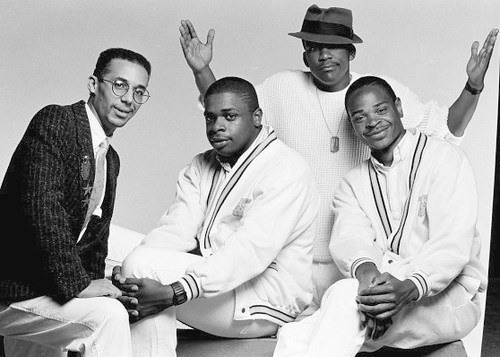 The R&B/ Post-Disco band Timex Social Club, also known as The Timex Crew, was founded by lyricist Marcus Arnett Thompson in 1985. Its membership included Gregory “Greg B” Thomas, Michael Marshall, Craig Samuel, and Darrien Cleage, all students attending Berkeley High School in Berkeley, California. The group was part of the New Jack Swing movement and was produced and promoted by Jay King, founder of the R&B Club Nouveau.

In 1986, Timex Social Club opened for Run-DMC on the “Raising Hell tour” in Long Beach, California, St. Louis, Missouri, and New York City. Soon afterwards the ensemble’s name was changed to Timex Group USA and they released their only studio album, Vicious Rumors on the Dayna/Fantasy Records label, The album peaked at no. 29 on Billboard’s R&B Albums. However, the smash hit song from the album, “Rumors” peaked at no. 1 on US Billboard R&B and reached no. 8 on the Billboard Hot 100 chart. It also reached no. 13 on the UK Singles chart and was ranked as one of the 100 biggest songs of 1986, selling more than one million copies in the U.S. alone.

In 1986, Kansas City Mayor Richard L. Berkley presented the group with a “Key to the City” while Missouri Governor John D. Ashcroft of Missouri issued a Proclamation honoring them across the state. In 1987 the group received several awards for its artistic accomplishments, including being nominated for the American Music Award; nominated for the Soul Train Award for “Best Single – Group, Duo, or Band” for the hit “Rumors.” as well as for the “Best Rap Single.”

Despite their success, a money dispute led the Timex Social Club to disband in 1987.

In 2011, Marcus Thompson released the book Vicious Rumors How Do Rumors Get Started: The True Story of Timex Social Club, which took an introspective look at the history of the group and examined the emerging rap music industry in the 1980s.