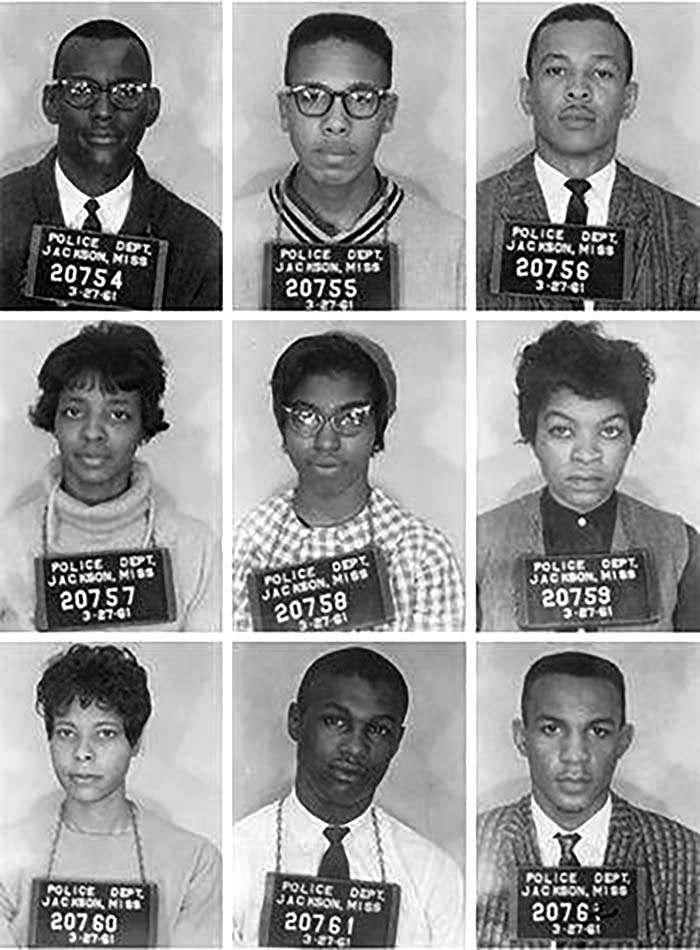 The Tougaloo Nine were nine students who, in 1961 while undergraduates at Tougaloo College, staged sit-ins at the all-white Jackson Main Library in Jackson, Mississippi. Prior to the sit-ins, African Americans were prohibited from using the city’s main library. The Nine—Meredith Coleman Anding Jr., James Cleo Bradford, Alfred Lee Cook, Geraldine Edwards, Janice Jackson, Joseph Jackson Jr., Albert Earl Lassiter, Evelyn Pierce, and Ethel Sawyer—were members of the Jackson Youth Council of the NAACP. Medgar Evers, who was who then president of the Jackson branch of the National Association for the Advancement of Colored People (NAACP), trained Tougaloo Nine for the sit-in protest.

On March 27, 1961, the Tougaloo Nine began their protest by entering the Jackson Main Library. Typical of civil rights demonstrators of that era, the women wore dresses and the men wore shirts and ties. The Nine first visited the George Washington Branch (Colored) to request books they knew would not be in that facility. When they were told the books were not there, they went to Jackson Public Library where they attempted to stage a “read-in.” They sat at different tables across the library reading library books quietly. The Librarian called the Jackson police who arrived and asked them to leave. When they did not, the nine were arrested, charged with of breach of the peace, and jailed.

On March 28, other Jackson State students boycotted classes in protest, held another rally, and marched to the Jackson City Jail were the nine were being held. They were joined by townspeople led by Medgar Evers. Jackson Police used tear gas and dogs against the protesters which included women and children. An 81-year-old man suffered a broken arm from an attack by a police officer with a nightstick. Evers’s supporters raised bail for the protesters who were arrested. They were later represented by local civil rights attorney Jack Harvey Young Sr.

The Tougaloo Nine went to trial on March 28, 1961 and were all found guilty of breach of the peace. Each student was sentenced to 30 days in jail and fined $100. The judge however suspended the sentences on the condition that there would be no further demonstrations. There were none.

Nonetheless the Tougaloo Nine’s actions led the NAACP to file a class action lawsuit on January 12, 1962 against the Jackson Public Library, calling for its integration. In June 1962 U.S. District Court Judge William Harold Cox ordered the Library to desegregate. Although the Tougaloo Nine episode was one of the first desegregation victories in the 1960s civil rights campaign in Mississippi, the story was largely ignored at the time. On August 17, 2017, the Tougaloo Nine was honored for their contributions with a freedom trail marker in Jackson, Mississippi.