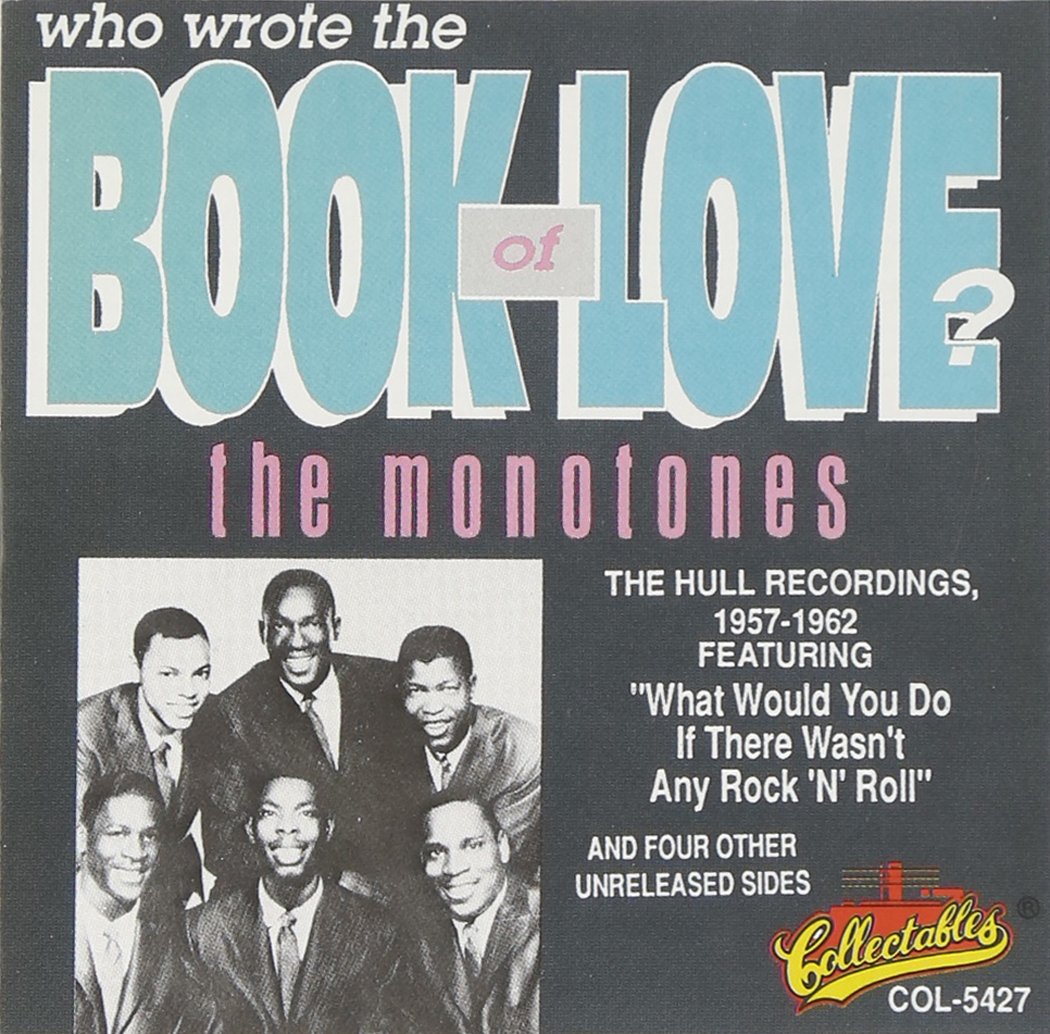 The Monotones were a six-member American doo-wop group in the 1950s. Though they recorded other songs, they had only one hit single, “The Book of Love,” which reached No. 5 on the Billboard 100 chart in 1958.

The teenagers lived in Baxter Housing Project and attended high school in Newark, New Jersey. They sang in the choir at New Hope Baptist Church along with Dionne and Dee Dee Warwick. The choir director was Cissy Houston. In 1955, they formed the Monotones. The six members of the group consisted of: 17-year-old Charles Howard Patrick who sang lead; 16-year-old Warren Davis, first tenor; 15-year-old George Malone, second tenor; 17-year-old Frankie Smith, bass singer; 15-year-old John Ryanes, second bass singer and his older brother 18-year-old Warren Ryanes, baritone; Charles’s brother James, an original member, left soon after the group was formed. In 1956, inspired by the popular R&B artists of the day like the Heartbeats, the Spaniels, the Moonglows and the Cadillacs, the Monotones appeared on Ted Mack’s Original Amateur Hour and won first prize for their version of the Cadillacs’ single, “Zoom.”

The song “Book of Love” shortened from “Who Wrote the Book of Love” was written by Charles Patrick, Warren Davis, and George Malone. Recorded in 1957 by Ascot Records, the small record label was unable to keep up with distribution. Consequently, they sold the single to Chess Records, a subsidiary of Argon. The song became a hit in the US, Europe, and Australia. It peaked at No. 3 on the R&B Billboard Chart, No. 5 on the Pop Chart, No. 5 in Australia, and sold over one million copies. The group toured with Sam Cooke, Jackie Wilson, and Frankie Lymon among others, and appeared on stage at the Apollo Theater in Harlem and on TV well into the 1960s.

The Monotones recorded a few follow-up songs, but none made the charts. They left Argo and signed with Hull Records; however, they had little success. As the original members left the group, they were replaced by Carl Foushee, Bernard Ransom, and Victor Hartsfield. Finally, the group disbanded in 1962 though the surviving members continued to perform. In the 1990s Malone and the Monotones got together to perform on the oldies circuit.

By 1972, the first of the original Monotones, John Ryanes, died in Newark, New Jersey at the age of 31. His brother, Warren Ryanes died in 1982 at age 45. That same year, Warren Davis died at age 43. Frankie Smith passed away in 2000 at age 62. George Malone, died in 2007 at age 67 in Phoenix, Arizona. The last member of the original Monotones, Charles Howard Patrick, died in 2020 at age 82. With the exception of Malone, the others all died in Newark, New Jersey.

The song “Book of Love” continued to be covered by 50 different artists including Doo Wop revivalist Sha Na Na and was used as the theme song for “The Newly Wed Game.”