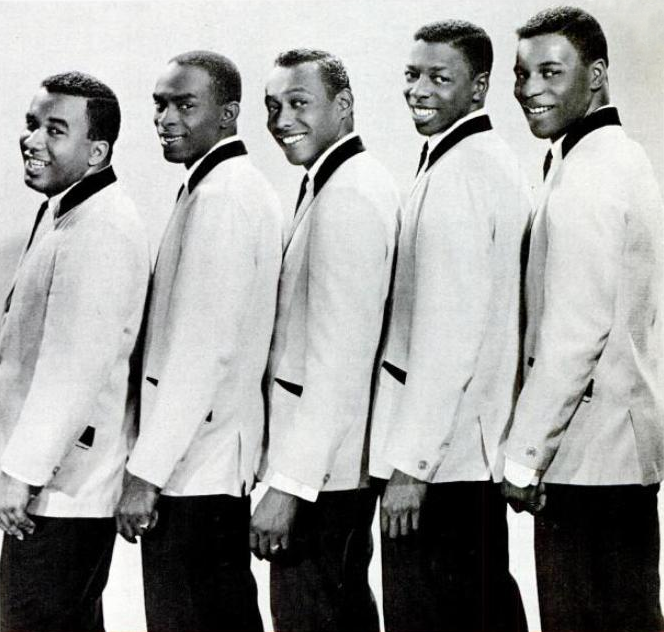 Formed in Detroit, Michigan in 1955, the Spinners began as the Domingoes. The five African American founders were Henry Fambrough, Robert ‘Bobbie’ Smith, Robert “Steel” Smith, Billy Henderson, and Pervis Jackson.  All of them attended Ferndale High School in Detroit.

Although the group performed for six years, only in 1961 did they first become noticed by a record company. Harvey Fuqua’s Tri-Phi records signed the group and recorded their first hit song “That’s What Girls Are Made For.”  The song was an instant summer hit and peaked at 27 on the Top 100 charts in August 1961.  In November of the same year, the Spinners released another top 100 hit, “Love (I’m So Glad) I Found You.”

In 1963, Tri-Phi Records was bought out by Motown Records. The following year The Spinners played at the Apollo Theatre for the first time and released “I’ll Always Love You” which peaked on the R&B charts at number 35.  The group released a single every year from 1965 to 1969 but achieved little success.

In 1970, however, the group’s fortunes changed. They took Stevie Wonder’s hit song “It’s a Shame” to number 14 on the Billboard pop chart. They also released the album 2nd Time Around.  With convincing from Aretha Franklin, the group ended their Motown Record contract and signed with Atlantic Records. After signing, Philippé Wynne joined the group as a lead singer. The Spinners released their first Atlantic album, The Spinners (1972) with the help of producer Thom Bell.  The album had five top 100 songs including “I’ll Be Around” which peaked at number three. “I’ll Be Around” was also The Spinners’ first million sold hit single helping the album earn a gold disc in October 1972.

The Spinners released another million selling single, “Could It Be I’m Falling in Love” in 1973. The following year they released the album Mighty Love, which contained three top 20 songs.  Philippé Wynne left the group in 1977 and was replaced by John Edwards.  The group had minor hits but was significantly less successful.  In the early 1980s the group had only two songs that cracked the top 100. Their final song to break the top 100 charts was a rendition of Willie Nelson’s “Funny How Time Slips Away,” which reached 67th.

Throughout the remaining years of The Spinners, the group went through a multitude of personnel changes.  Currently the group can still be seen touring, but the only remaining original member is Henry Fambrough. Charlton Washington, Jessie Peck, Marvin Taylor, and Ronnie Moss are the other singers who perform as The Spinners.