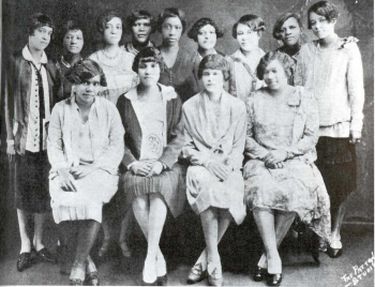 Sigma Gamma Rho Sorority, Inc. (SGRho), one of the four college sororities for African American women, was founded by seven public school teachers at Butler University in Indianapolis, Indiana, on November 12, 1922. SGRho is thus the only Greek-letter organization founded by university graduates rather than undergraduates. It is also the only black Greek-letter sorority founded outside of Howard University. Sorority founders established the first undergraduate chapter in 1929 at Butler University.

Today Sigma Gamma Rho Sorority has more than 90,000 members in 500 alumnae and undergraduate chapters across the United States, Bermuda, the Virgin Islands, the Bahamas, Germany, and South Korea. It is headquartered in Cary, North Carolina.

SGRho sorority’s mission is conveyed in its slogan, “Greater Service, Greater Progress.” Public service, leadership development, and education of youth are the hallmarks of the organization’s programs and activities. SGRho’s programs include a National Education Fund, which provides scholarships to male and female students of all racial backgrounds. Its Project Reassurance Program helps care for low-birth-weight infants born to teenage mothers. Project Reassurance also provides education about the importance of pre-natal and post-natal care and child development.

Project Africare provides microloans and grants to African women to purchase equipment to help them build businesses, while Project Wee Savers encourages children between the ages of six and 18 to become financially literate by learning about the importance of saving and of purchasing stocks and bonds. The Mwanamugimu Essay Contest is designed to encourage students to increase their awareness of African history and contemporary developments on the continent. One of the sorority’s most ambitious programs, the Sigma Public Education and Research Foundation (SPEAR), addresses black family disintegration through education and financial assistance. The sorority’s health initiatives include the National Bone Marrow Donor Program and the Cancer Awareness Program, while the Sigma Youth Symposium addresses the problems of black inner-city youth, including drugs, teen violence, teen pregnancy, low self-esteem, and suicide.

Lawrence C. Ross, Jr., The
Divine Nine: The History of African-American Fraternities and Sororities in
America