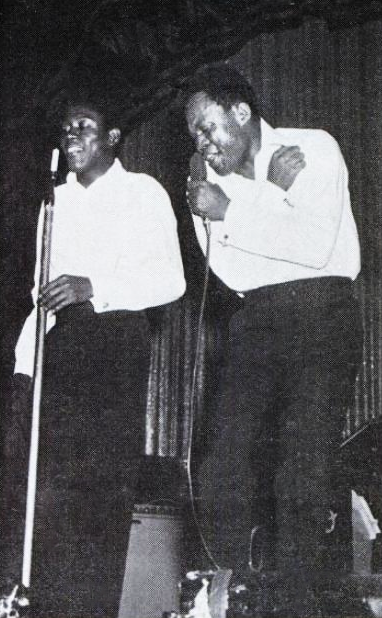 Sam & Dave were the most successful black rhythm and blues duo of the 1960s although they performed into the early 1980s.

Sam Moore, was born in Miami, Florida and Dave Prater, was born in Ocilla, Georgia. Both men sang in church while growing up. They performed separately in Southern clubs during the 1950s and met each other in Miami’s King of Hearts Club in 1961. Following that meeting, the two singers became a duo and signed with Roulette Records, releasing a few mildly successful singles.

In 1965, Sam & Dave got their big break, and signed with Atlantic Records which then turned over the duo to their affiliate, Stax Records, where they were paired with writing and production team, Isaac Hayes and David Porter. The writers gave Sam & Dave a string of hits including “You Don’t Know Like I Know” (1965), “Hold On! I’m Comin” (1966) and “Soul Man” (1967). They were known for their exciting live performances during the late 1960s, filling rooms with their infectious energy.

Unfortunately, the duo’s career became rocky in 1968, when Stax and Atlantic broke their partnership. This ended Sam & Dave’s relationship with writers Hayes and Porter, which significantly impacted their music. Additionally, Moore and Prater weren’t great friends off-stage, creating tension that ultimately led to their split in 1970.

During the 1970s, Sam & Dave reunited many times, but their real resurgence came in 1978 when comedians John Belushi and Dan Aykroyd created their Blues Brothers routine on Saturday Night Live, drawing on the performance style of Sam & Dave. This sparked renewed interest in the duo, and booked them multiple shows. Sam & Dave played a few more gigs during the 1980s, but ultimately separated again due to a strained friendship in December 1981.

Sam & Dave were inducted into the Rock & Roll Hall of Fame in 1992, honoring the waves they made in the soul community in the 1960s. Dave Prater died in a car accident in 1988, at age 50. Moore continues to perform, including in September 2017 at the Royal Albert Hall in London, England with Jools Holland and his Rhythm & Blues Orchestra. Sam Moore was 81 years old at the time of the performance.