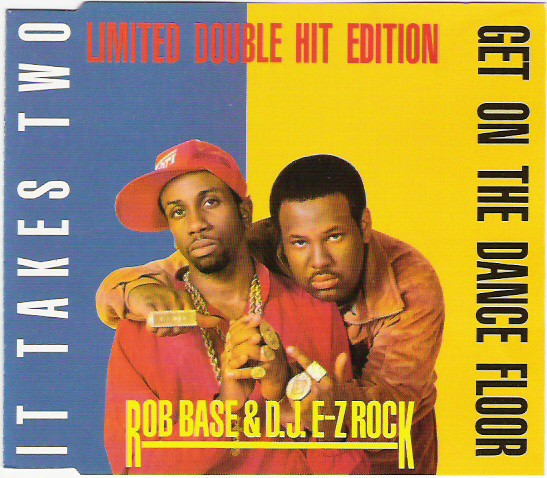 Rob Base and DJ E-Z Rock are from Harlem, New York. Base was born Robert Ginyard, and DJ E-Z Rock was born Rodney “Skip” Bryce. Coincidentally, they were both born on May 18, 1967, and met in 1977 in the fifth grade, in the same class in a Harlem Public School. Base had a mic, and E-Z Rock supplied the turntables and the duo released their first single, “DJ Interview,” from their debut album It Takes Two in 1986 after they signed to Profile Records.

Their 1988 single of the same name from the album, It Takes Two, became their most successful song. It peaked at no. 17 on the Billboard R&B Chart, no. 36 on the Billboard Hot 100, and no. 24 in the United Kingdom. The single sold seven million records.

Their follow up single “Get on the Dance Floor,” reached no. 1 on the Billboard Dance-Disco Chart. In 1989 the duo had two more hits from their album, It Takes Two. The single “It Takes Two” was rereleased and peaked at no. 3 on the Dance chart and no. 49 in the UK. “Joy and Pain reached no. 9 Dance, no. 11 R&B, and no. 58 on the Billboard Hot 100. It also reached no. 47 on the UK Chart. Later that year they released the album The Incredible Base, which sold more than 500,000 copies.

Rodney “Skip” Bryce died on April 27, 2014, of a diabetic seizure in Manhattan, New York. He was 46. Rob Base performed at the 2017 NBA Finals – Cleveland Cavaliers vs. Golden State Warriors, at Oracle Arena in Oakland, California. And in 2018, he also performed alone during Arena Bowl XXXI’s halftime show, at the game between the Baltimore Brigade and Washington Valor at the Royal Farms Arena, in Baltimore, Maryland.