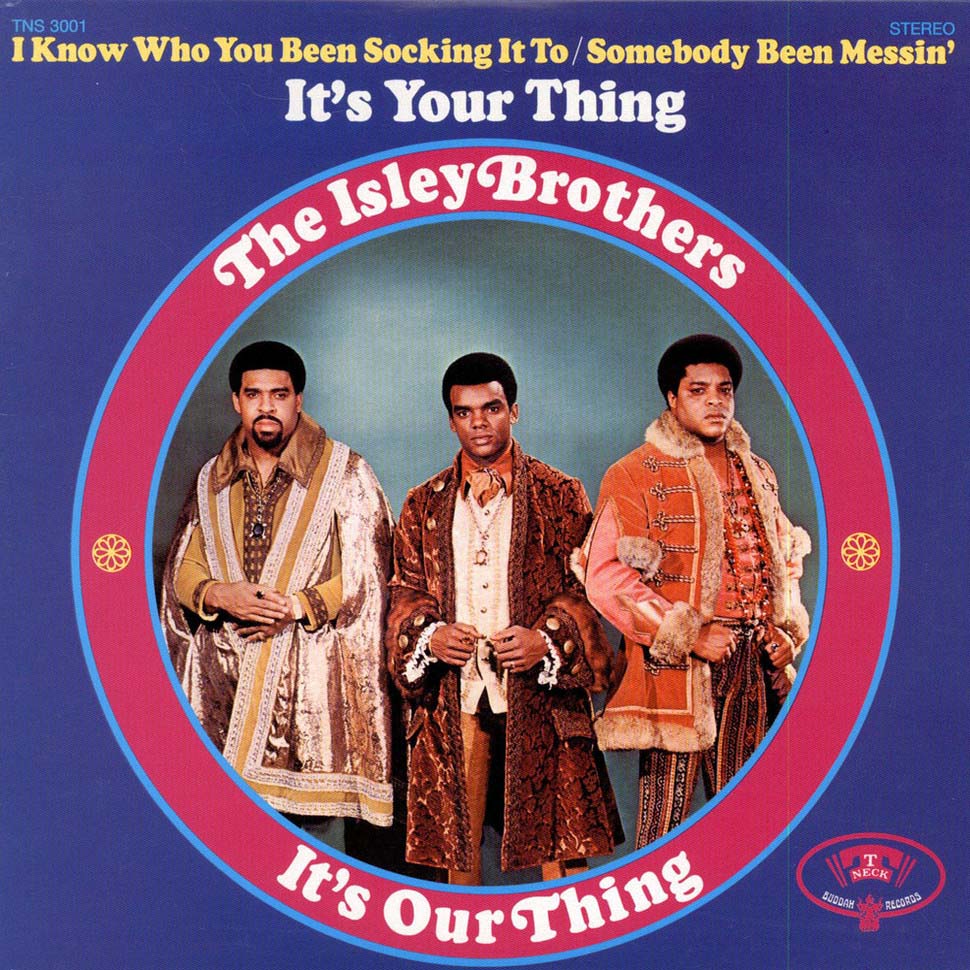 It's Our Thing (T-Neck Records and Buddah Records, 1969) by The Isley Brothers
Fair use image

The Isley Brothers were a band on the Billboard Top 40 charts for fifty years. Their ability to synthesize R&B, soul, funk, disco, and rock & roll elements into their discography made the group electrifying and interesting. The band was important to the creation of the soul ballad and the funk genre. Their journey has brought them into relationships with iconic artists such as: Jimi Hendrix; Elton John during their U.K. tour; the Beatles, who covered their first song “Twist and Shout”; and important ’90s rappers Dr. Dre and Tupac Shakur.

Six boys were born to O’Kelly and Sallye Isley, a college-educated, musical couple, in Lincoln Heights, Cincinnati: O’Kelly Jr. in 1937, Rudolph in 1939, Ronald in 1941, Vernon in 1942, Ernie in 1952, and Marvin in 1953. The entire family sang or played for the First Baptist Church, and in 1954 the eldest four boys formed a gospel quartet that traveled around the Midwest to perform. Tragedy struck in 1955 when Vernon was hit and killed by a car, resulting in the group disbanding.

When they came back together in 1957, Ronald became the lead singer and the band moved to New York City to pursue doo-wop. Produced George Goldner signed them to RCA records. Their first hit, “Twist and Shout,” came in 1961. It was on the charts for 19 weeks, peaking at number two on the R&B list and number 17 on the pop Top 20. The song was a greater hit, however, for the Beatles who recorded it 1963.

Struggling to find a hit, and a label that worked, the group started their own record company, T-Neck. The group struggled for two years even with the help of Jimi Hendrix as lead guitarist, before joining Motown Records in 1966. Motown had successful artists like the Supremes and the Temptations but the Isley Brothers voluntarily left the label in 1968. A legal battle with Motown over their most successful record, “It’s Your Thing,” which has sold over 5 million copies and since has been covered by more than 60 bands, ensued in 1969, the same year the band won a Grammy for Best R&B Vocal Performance.

Ernie, Marvin, and brother-in-law, Chris Jasper took the band into a new sound in the 1970s but friction and disinterest led to the group disbanding in 1984 with the youngest members signed to Columbia as “Isley/Jasper/Isley” and the older members signed to Warner Brothers. O’Kelly Jr. had a heart attack in 1985 and passed away; shortly after, Rudolph left and became a minister. Marvin was diagnosed with diabetes, and after a stroke and kidney failure had both his legs amputated in 1996. Jasper left the family to go solo but was unsuccessful. Ronnie and Ernie went on to contribute to the rap genre in the 1990s. Despite the breakup of the band, the Isleys were inducted into the Rock and Roll Hall of Fame in 1992 and the Grammy Hall of Fame in 1999.

In 1997 Ronnie declared personal bankruptcy after being accused of failure to pay taxes, and two years later the Isley estate was liquidated to pay nearly 8 million dollars in back taxes and fines. Ronnie was convicted and sentenced to 37 months in prison in 2005, but the band’s legacy and long-lasting musical presence lives on.

George Lipsitz, Footsteps in the Dark: The Hidden Histories of Popular Music (Minneapolis: University of Minnesota, 2007); Bob Gulla, Icons of R&B and Soul: An Encyclopedia of the Artists Who Revolutionized Rhythm (Westport, Connecticut: Greenwood Press, 2008).