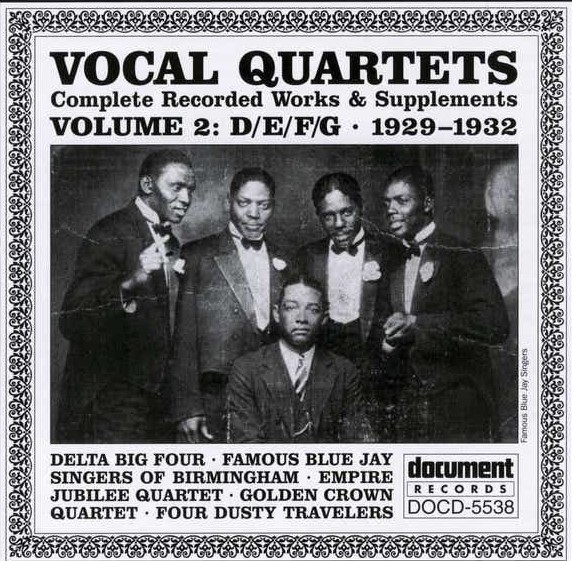 The Golden Crown Quartet was established in Norfolk, Virginia in 1919. The ensemble comprised baritone Samuel Benton, tenor Wilson Taylor, tenor James Holley and bass Maynard Bennett although very little is known about their backgrounds. Unlike the vast majority of African American religious artists in the 20th Century who focused on Gospel Music, the Golden Crown Quartet recorded Negro Spirituals, a type of music originally sung by enslaved people in the pre-Civil War period. Some of their recordings included “Scandalize my name” and “The Sign of Judgment.” Although the group recorded most of their compositions with OkeH Phonograph Corporation in New York City in 1929, there is no surviving documentation of release.

The Quartet later released “Lift Jesus Up” and “My God Called Me This Morning” on the Score Records label also in 1929. Several of the Quartet’s a cappella spirituals were included in the album Vocal Quartets Volume 2: D/E/F/G, Complete Recorded Works & Supplements (1929-1932) released on the Document label.

The Golden Crown Quartet was one of the first African American Christian ensembles in the Hampton Roads region (Norfolk, Portsmouth, Hampton, Newport News, Chesapeake, Virginia Beach, and Suffolk) to be heard performing on the early local commercial AM radio station WTAR in 1929. The Quartet disbanded in 1955.