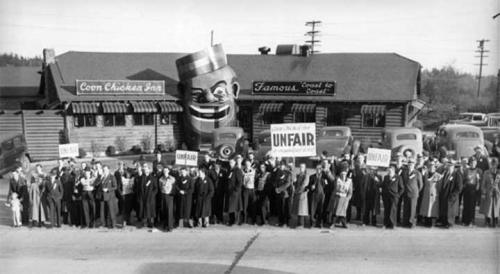 The Coon Chicken Inn was a fried-chicken restaurant chain located in the Pacific Northwest from the late 1920s through the late 1940s. The chain was famous for its ubiquitous “Coon” logo, a caricatured African-American male rooted in 19th century minstrel theatre and early 20th century advertising. The most prominent manifestation of the Coon caricature was the 12-foot high “Coon head” that served as the entrance to each restaurant location.

Maxon Lester Graham and his wife Adelaide founded the Coon Chicken Inn in Salt Lake City, Utah in 1925. The early success of this location prompted the opening of two additional chains in Portland, Oregon and Seattle, Washington in the early 1930s. The patrons and employees of the Coon Chicken Inn chains were predominantly white, though African Americans were hired to work in the kitchen of the Salt Lake City branch.

Graham adopted the Coon caricature and created the “Coon head” as a gimmick to attract customers in the emerging age of roadside restaurants, novelty architecture, and automobile convenience. Graham additionally promoted the chain through the distribution of postcards, newspaper advertisements, matchboxes, children’s fans, spare tire covers, and delivery cars, all of which prominently featured the Coon Chicken Inn logo. The Coon logo saturated the restaurants’ interiors as well. Plates, forks, menus, and placemats featured the caricature, as did menu items such as the “Baby Coon Special” and the “Coon Fried Steak.”

African Americans opposed this blatant display of racial hostility. In 1930, the Seattle branch of the National Association for the Advancement of Colored People (NAACP) and Seattle’s African American newspaper The Northwest Enterprise protested the opening of the local Coon Chicken Inn by threatening Graham with a lawsuit for libel and defamation of race. In response, Graham agreed to change the style of advertising by removing the word “Coon” from the restaurant’s delivery car, repainting the “Coon head” entrance to the restaurant, and canceling an order of 1,000 automobile tire covers. This small stride, however, was not enough to fully erase the image of the caricature from Seattle. Graham violated his agreement with the NAACP but managed to evade the lawsuit by changing the color of the Coon logo from black to blue.

Graham closed the Seattle and Portland locations in 1949. The Coon Chicken Inn restaurant in Salt Lake City, however, remained open until 1957. It is remembered today in films such as Ghost World and The Confederate States of America; relics of the Coon Chicken Inn are generally regarded as Black Memorabilia collectables.