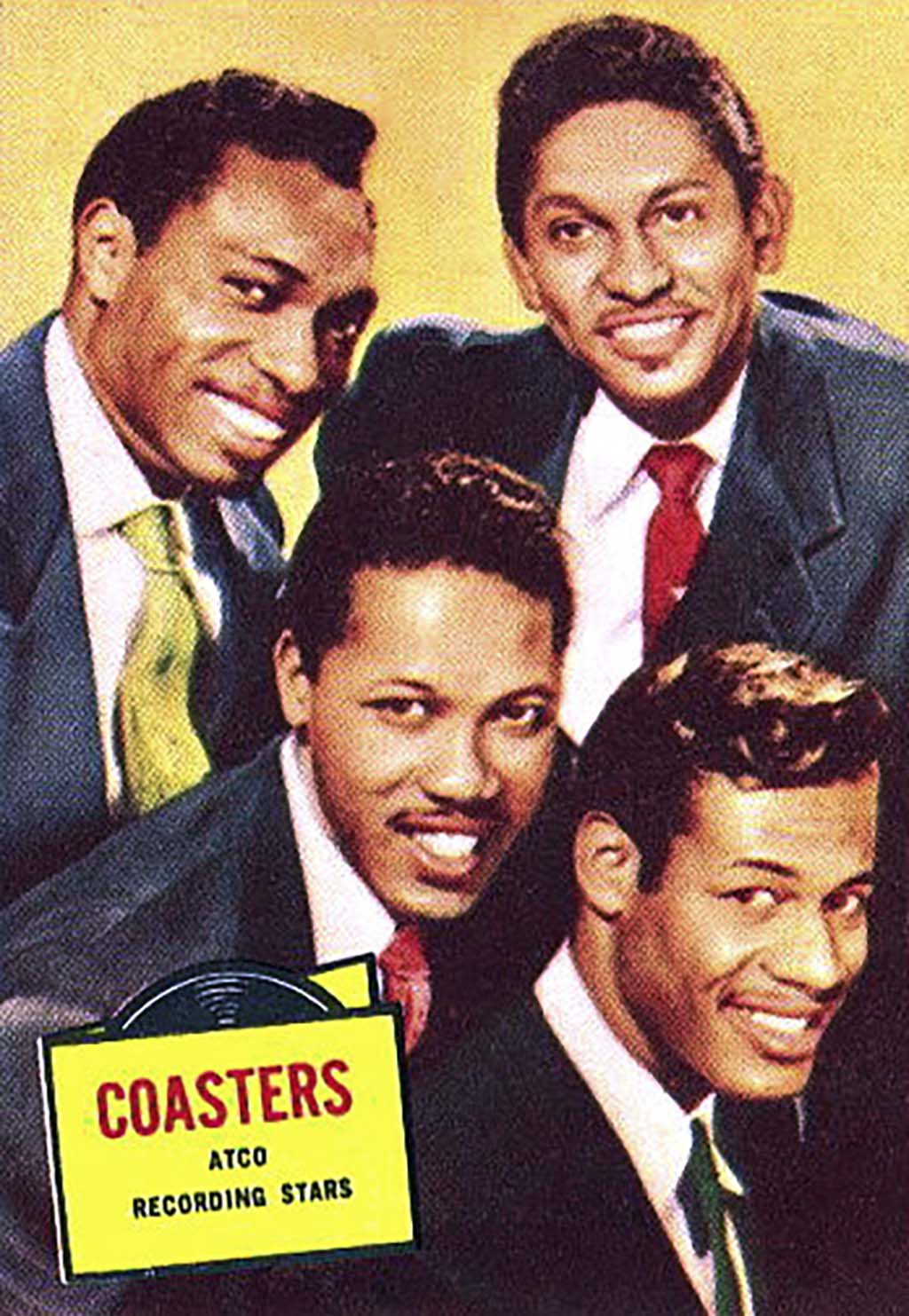 The Coasters began on September 28, 1955, in Los Angeles, California after four of six members from another singing group, The Robins, broke off to start this new group. Bobby Nunn and Carl Gardner, leading vocalists of The Robins, were convinced by the up-and-coming composing/managing team of Jerry Leiber and Mike Stoller to let them represent The Robins. Their tiny label, Spark L.A., which had represented The Robins, produced their biggest hit, “Smokey Joe’s Café” in 1955, which caught the attention of Atlantic Records.

Atlantic offered a contract to produce The Robins. Only two of the Robins, however, Gardner and Nunn, were willing to move to the new label. The duo then moved to New York in late 1957 and added Cornell Gunter and Will “Dub” Jones to their group to form a quartet.

Their quartet had immediate success under the production/composition of Leiber and Stoller. Unlike almost all of the original rock and roll records to that point, Leiber and Stoller wanted to create tracks that included a story or some sense of humor which often required more recording “takes” than for a typical musical number. In 1956, the group produced their first single as The Coasters, “Down in Mexico.”  It was an R&B hit and even appeared in the soundtrack of Quentin Tarantino’s 2007 movie Death Proof.

In 1958, The Coasters crossed over to the pop industry after producing “Searchin’,” a U.S. top-ten hit, which also topped the R&B chart for thirteen weeks and became, arguably, the biggest song of 1957. Their next hit, “Yakety Yak,” featuring King Curtis on the tenor saxophone, included the famous lineup of Gardner, Guy, Jones, and Gunter and was released in 1958. It became the act’s only national number-one single, topping the R&B chart.

The Coasters produced a few more hit songs in the late 1950s including “Charlie Brown,” which reached number two on both charts. It was followed by “Along Came Jones,” “Poison Ivy” (number one for almost two months on the R&B chart), and “Little Egypt (Ying-Yang).”

As tastes in music (along with the group’s lineup) changed, the success they experienced in the 1950s did not continue into the next decade. The group added and dropped members including Billy Guy, Vernon Harrell, Earl “Speedo” Carroll, Ronnie Bright, and Jimmy Norman, hoping to get the right combination to return to the top of the charts.  The Coasters reentered the charts briefly in 1964 after a British Volkswagen dealer used their song “Sorry But I’m Gonna Have to Pass” in an advertisement.

Although many groups did and continue to use the name The Coasters, only Carl Gardner holds the legal rights to it. He frequently made efforts to stop bogus bands who had no connection to the original Coasters from using their name.

In In 1987, the Coasters became the first group inducted into the Rock & Roll Hall of Fame, crediting the members of the 1958 configuration. The Coasters also joined the Vocal Group Hall of Fame in 1999. The band is still active with members J.W. Lance, Primotivo Candaleria, Robert Fowler, and Dennis Anderson.