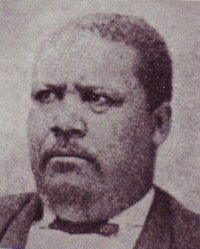 Before the Civil War, when he was 18, William Grose left his home in Washington, D.C. and enlisted in the U.S. Navy. Assigned to the USS Vincennes in 1853, he went to South Africa, China, Hong Kong, Japan, Russia and the Arctic during his tour of duty.  Grose, who was honorably discharged in San Francisco at the end of his enlistment, worked in the California gold fields and helped African Americans illegally enslaved in California escape their bondage.  In 1858 he led his family and a group of African American families to British Columbia where they established a black settlement on the Frazer River.

Encouraged by an interaction with Washington Territorial Governor Richard D. Gholson, Grose came to Seattle in 1860 where he quickly found work as a cook. At the time, Seattle was a small village of 300 people, and the primary source of employment was Henry Yesler’s sawmill. Grose, the second black settler in Seattle, prospered and in 1876, he opened his own establishment, a restaurant called “Our House.”  His business was quite successful, and by 1883 he owned and operated a 3-story hotel and restaurant plus a 12-acre ranch in Madison Valley.  Grose was a very impressive person, weighing over 400 pounds and by the time of his death was one of the wealthiest men in the city. He was well-known as a generous person who extended credit and friendship to those in need.

William Grose grew up during a time when African Americans were forbidden by law to read and write, yet he traveled to distant shores, settled in Seattle and became a successful businessman and landowner.  He was a Mason and one of the founders of First African Methodist Episcopal (AME) Church in Seattle. Known as a generous supporter of African American causes, he was a friendly and respected neighbor in pioneer Seattle.