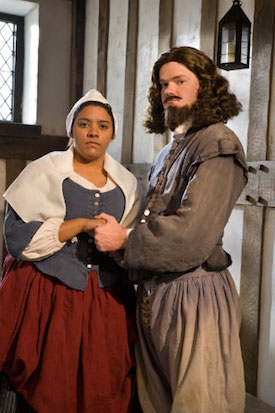 Elizabeth Key Grinstead was one of the first women of African American ancestry in the North American colonies to sue for her freedom and win. Key won freedom for herself and her infant son, John Grinstead II, in the colony of Virginia on July 21, 1656. Elizabeth Key was born in 1630, in Warwick County Virginia, only eleven years after the first Africans arrived in the colony. She was the product of an interracial union; her mother Martha was black and her father, Thomas Key, white. Since slavery was not legally established in Virginia at that time, Key was considered an indentured servant. She would later base her claim for freedom on the fact that her father was an Englishman and that she was a baptized Christian.

Born in England, Thomas Key had come to the Virginia colony in 1616. He became an early tobacco planter and was eventually elected to the Virginia House of Burgesses.  Key fathered Elizabeth with an indentured African servant in 1630.  The daughter was considered “illegitimate” because Key was married to another woman who lived in a different county. Although at first denying paternity, Key was forced by the colony to claim and take responsibility for the girl. He later arranged for her to be baptized in the Church of England.

The colony required that all illegitimate children be indentured for a period of apprenticeship until they “came of age” and could begin working to support themselves.  When Key was six, her father placed her in the custody of Humphrey Higginson for a nine-year indenture. Key died shortly after the indenture was arranged. Higginson, a wealthy tobacco planter, was expected to act as guardian of Elizabeth Key until she reached the age of fifteen.

When Elizabeth was ten, Higginson transferred her indenture to John Mottram, the first white settler in Northumberland County, Virginia. Mottram took Elizabeth to the undeveloped region in 1640. In 1650, he paid for the passage of twenty young English white indentured servants to his plantation, Coan Hall. Sixteen-year-old William Grinstead was among those servants. Grinstead and Elizabeth Key began a relationship and had a child, whom they named John. They were prohibited from marrying, however, because Grinstead hadn’t served his indenture and Elizabeth Key, who should have been set free in 1645, was still held in indentured status.

When Mottram died in 1655, the heirs of his estate classified Elizabeth Key and her infant child as Negro slaves and thus property of the estate. William Grinstead, now an attorney, brought suit on behalf of Elizabeth and their son, claiming that she was a free woman and an indentured servant with a freeborn son. He argued that she had been illegally kept in servitude ten years beyond her term.

The court ruled in favor of Elizabeth Grinstead, granting her and her child freedom. The court said that according to longstanding English common law, the legal status of the father determined the status of the child and that Elizabeth’s father was a free Englishman. It was also influenced by the precedent set in other cases which said a practicing Christian could not be enslaved. Further, the court ordered the Mottram estate to compensate Key with corn and clothes for her ten lost years. The court decision was upheld by the Virginia House of Burgesses, which appointed a special committee to investigate the matter.

In 1656 Grinstead and Key legally married and had a second son before he died in early 1661. Elizabeth Grinstead would remarry a widower, John Parse. Upon his death, she and her sons, John and William Grinstead II, inherited five hundred acres of land. Elizabeth Key Grinstead died on January 20, 1665.

Ironically, the Grinstead case prompted the Virginia Assembly to codify laws regarding racial slavery.  In 1660 it declared that from that point forward, all blacks held in indentured servitude would be considered enslaved for life. The prohibition against enslaving Christians was also removed. In 1662 the assembly upended longstanding English common law by declaring that the legal status of a child followed its mother rather than father. The legislation established the principle known as partus sequitur ventrum which made slavery multigenerational by ensuring that any child born to a female slave, regardless of paternity, would be a slave for life unless explicitly declared free.