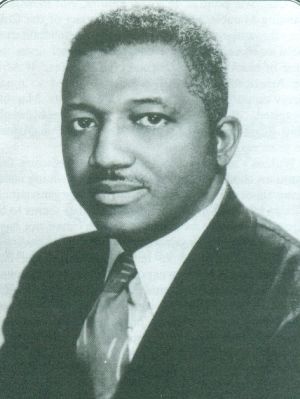 Noah Webster Griffin is best known as the first director of the West Coast Regional Office of the National Association for the Advancement of Colored People (NAACP), established by the national headquarters in 1942. Griffin was born in 1896 to formerly enslaved parents Gilbert Buchanan and Josephine Mills Griffin in Lake City, Florida. He and his brother Gilbert attended high school at the First Baptist Academy in Jacksonville, Florida. Griffin graduated from the Academy in 1915. After graduation Griffin worked briefly as a high school teacher until he joined the United States Army during World War I.

After the war, in 1919 Griffin enrolled at Fisk University in Nashville, Tennessee, and majored in Latin and Greek. After receiving his degree he later earned his master’s degree in Latin and Greek at Iowa State University in 1926 and his doctorate in the same field from Indiana University. Griffin briefly taught at Lincoln University in Pennsylvania but by 1931 he was teaching in a Texas high school.  There he met his future wife, Terressa E. Ballou, who was also a teacher.  The couple married, had two sons, and settled in St. Petersburg, Florida where they both taught in public schools.

While in Florida, Griffin became president of the state NAACP and assumed the risks that came with the office including repeated death threats and violence against him and his family. In 1938, Griffin, as a member of the Florida State Teacher’s Association (the association of black teachers in the state) and as NAACP president, along with his wife, legally challenged the pay disparity of black and white teachers.  African American teachers with comparable credentials and heavier class loads were paid an average of half of white teachers’ salaries in Florida.

The Griffins were fired for their campaign to equalize salaries.  Nonetheless they continued to fight the state of Florida over equal pay. NAACP Legal Defense Fund attorney Thurgood Marshall, who had been one of Griffin’s students at Lincoln University, urged Griffin to file in a Federal court under the provisions of the 14th amendment.  The Griffins won the case, but he was subsequently beaten and forced to leave Florida.

Griffin moved to California at the request of NAACP executive secretary Roy Wilkins and was offered the position of western regional director.  He accepted and situated the regional office in San Francisco. As a regional director in the World War II years he oversaw the spectacular growth of the Association due to the large scale migration of blacks to the West Coast.  Many of the newcomers joined NAACP branches and made them much more assertive in challenging racial discrimination in employment, housing, and education and in calling attention to police brutality.  Griffin held his position until 1950 but continued to work with the NAACP until he retired in 1961. He remained in San Francisco, California, until he passed away August 17, 1974.  He was 78 at the time of his death.