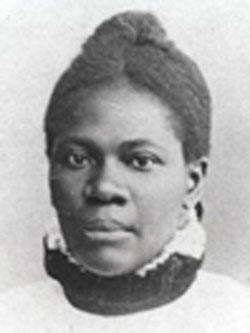 Eliza Ann Grier was born enslaved in Mecklenburg, County North Carolina in 1864 but along with her parents, Emily and George Washington Grier, she was freed by the 13th Amendment to the US. Constitution in 1865.  Grier eventually earned her M.D., becoming in 1898 the first African American woman to practice medicine in Georgia.  Little is known of Grier’s early life beyond her growing up in Atlanta where she and her family moved in 1869.  In 1883, nearly 20 years after her emancipation, Grier entered Fisk University in Nashville, Tennessee with the goal of becoming a teacher.  She earned a degree in education from Fisk eight years later in 1891 because she took every other year off to pick cotton and perform other work to earn her tuition to continue her studies.

Shortly before graduating from Fisk, Grier decided she wanted to become a medical doctor.  She wrote to the Dean of the Woman’s Medical College of Pennsylvania requesting information about tuition and the possibility of pursuing advanced medical education.  Grier indicated that she wished to become a medical doctor because she could benefit her race more as a physician than as a teacher.  She hoped for both admission and financial assistance.  The College admitted her but did not provide any help, prompting her to revert to the strategy she employed at Fisk, alternately working and studying for eight years until she completed her medical degree.

In 1897 after graduating from the Women’s Medical College of Pennsylvania, Dr. Eliza Grier returned to Atlanta, Georgia.  In 1898 she wrote “I went to Philadelphia, studied medicine hard, procured my degree, and have come back to Atlanta where I have lived all my life, to practice my profession.  Some of the best white doctors in the city have welcomed me and say that they will give me an even chance in the profession.  That is all I ask.”

By 1899, however, Grier moved her practice to Greenville, South Carolina where she specialized in obstetrics and gynecology.  In 1901 she contracted influenza and could not see patients for six weeks.  Facing the loss of her practice, Dr. Grier wrote a plea for financial assistance to Susan B. Anthony.  The famous suffragist could not help her but sympathetically forwarded her request to the Woman’s Medical College.  It is not known if the College provided help.

Later in 1901 Grier moved to Albany, Georgia partly because her brother, Dr. R.E. Grier, also practiced medicine there.  Tragically, after struggling for eight years to become a physician, Dr. Eliza Ann Grier died in 1902 at the age of 38 after only five years of medical practice.  She was buried in Charlotte, North Carolina.