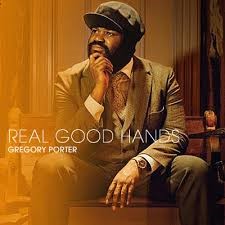 Jazz baritone and composer Gregory Porter was born on November 4, 1971, in Sacramento, California, to Rufus Porter from Memphis, Tennessee, and Ruth Porter, a minister from Shreveport, Louisiana. However, he and his seven siblings were reared in Bakersfield, California. Porter was taught to sing by his father at an early age.

After graduating from Highland High School in Bakersfield in 1989 he received a full athletic scholarship as a football lineman for San Diego State University. During his junior year (1992) his shoulder was injured, shortening his planned football career. In 2004 he moved to Brooklyn, New York to work in his brother’s cafe in Bedford-Stuyvesant as a chef during the day and be a jazz singer at night. In 2005 Porter married Victoria Stepanov, a visual artist from Moscow, Russia. They have two children, Demyan and Josie.

In 2012 Porter began wearing a Kangol Summer Spitfire flat cap with a modified strap that covers his ears and chin. He began wearing the cap because of recent skin surgery but now continues to wear it because his fans now recognize him with that look.

Porter released several albums with the Motéma label, with his first one coming after his 40th birthday. His 2010 album, Water, reached no. 40 on the Billboard Album chart and remained charted for 2 weeks. It was nominated for “Best Jazz Vocal Album” at the 53rd Annual Grammy Awards. In 2012 he released Be Good which peaked at no. 6 and remained on the charts for 75 weeks. Hey Laura, released in 2013, was nominated for “Best Traditional R&B Performance” at the 55th Annual Grammy Awards. His second album that year, Liquid Spirit, peaked at no. 1 and stayed up for 16 weeks on Billboard Hot 200. It sold more than one million copies and won a Grammy for “Best Jazz Vocal Album.”

In addition, Be My Monster Love with the David Murray Infinity Quartet, featuring Macy Gray and Porter singing duets, rose to no. 47 on the album chart. It won the 2014 Grammy Award for “Best Jazz Vocal Album” at the 56th Annual Grammy Awards. His final album in 2014, Issues of Life: Features and Remixes, reached no. 36 and stayed up for two weeks. Also in 2014, Porter was presented the ASCAP Foundation Jazz Vanguard Award.

In 2016, Porter’s Take Me to the Alley reached no. 1 and remained charted for 75 weeks. By that time Porter had become an international star, performing in both Great Britain and Norway. Porter’s Nat King Cole & Me was released in 2017. It peaked at no. 1 and stayed charted for 26 weeks. In 2019, Porter released One Night Only: Live At The Royal Albert Hall in London that went up to no. 9 and remained charted for 4 weeks. His most recent studio album, released in 2020, was titled All Rise. This work was nominated for “Best R&B Album” at the 63rd Annual Grammy Awards. On May 6, 2020 Porter lost his brother, Lloyd Cornelius Porter to complications from COVID-19.

“An Evening with Gregory Porter,” https://www.blumenthalarts.org/events/detail/an-evening-with-gregory-porter-3; David Hughes, “Why does Gregory Porter wear a hat? The singer’s look explained – iNews, ”https://inews.co.uk/culture/music/gregory-porter-why-wear-hat-balaclava-headgeare-big-night-in-bbc-tonight-238763/amp; Jane Christie, “Interview-Gregory Porter on the loss of his brother to Covid and his new album,” https://www.scotsman.com/must-read/interview-gregory-porter-loss-his-brother-covid-and-his-new-album-2962567%3famp